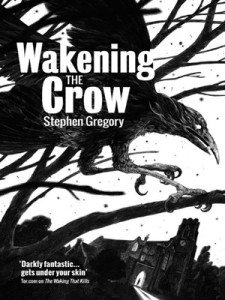 Stephen Gregory’s Wakening the Crow invokes not only the spirit of Edgar Allen Poe but also some of the psychological and supernatural aspects of the master’s writings that has had readers mesmerized since the 19th  century . In Gregory’s haunting and puzzling novel, Oliver Gooch is a marginally working librarian until his 7 year old daughter Chloe was in a car accident. She suffers brain damage and Oliver is only slightly uncomfortable that he prefers this version of Chloe, mute and pliable, to pre-accident Chloe who he describes as “a horrid child” and “rude, petulant, and defiantly uncooperative.” He is also minimally guilty that the large settlement allows him to open up his own book store which he names “Poe’s Tooth” due to a gift he is given by an elderly bookseller.  The reason the gift is given to Oliver is unknown but the bookseller has a connection to the Gooch family that Oliver is yet aware of. The gift comes with a letter stating it to be Edgar Allen Poe’s actual tooth that was pulled from his mouth when Poe was a small boy.

Anyone faintly familiar with the supernatural psychological novel knows that this is not going to go well. Along with the spectra of the tooth, Oliver, Chloe, and his wife Rosie are also visited by a ragged and somewhat sinister looking crow who is reluctant to leave the confines of the bookstore, formerly used as a church. The crow seems to have a strange connection with the mute child. The reader as well as our narrator wonders if the tooth may be some kind of curse and, in many ways, this novel is just as much a homage to W. W. Jacob and his classic short work, “The Monkey’s Paw” as it is to Poe. Yet Gregory is not just writing a homage to the old horror writers and their talent at creating a work of atmospheric terror. He is also creating his own tapestry of a dysfunctional family caught in an inexplicable horror and he does it with the minimum of gore and the maximum of dread and angst. Oliver is not very likable. His relationship with his daughter is creepy at best. And at worst? That is a question the author leaves out there. Rosie seems to be the grounding for the family yet we suspect that grounding is tenuous. Chloe is the question mark. In her post-accident cherubness, she seems to be a tabula rasa for the interpretation that Oliver places on the events. Eventually the entire family become unhinged by the presence of the crow or is it just the secrets, guilt and consequences of the behaviors of this family catching up to them due to the catalyst of supernatural forces?

Gregory doesn’t let you know too much too soon. His hoarding of details and doling out of information only until you need it is quite masterful. It is also why some may feel this book moves a little too slowly. Yet the slow psychological reveal is fast becoming a lost art in storytelling especially in the horror genre. This is why I recommend Wakening the Crow so highly. It is a nice example of introspective storytelling yet when it is necessary, and especially at the end, Gregory can scare the pants off you.  The average reader may also feel uncomfortable with the relationships in the Gooch family yet this adds to the eeriness and developing horror of the tale. Overall, Wakening the Crow is an above average work of horror that will stay with you quite a while after you read the last page.