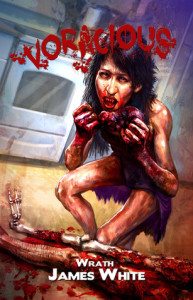 Will you like Voracious? Here’s a simple test. After Lelani Simms, a model who has undergone an expensive genetic weight-loss treatment, devours her boyfriend, White writes, “They were now united forever—or at least until her next bowel movement.” If you laughed, this is the book for you. If not, you might want to find some lighter fare.

Voracious is rife with dark, gross humor and even darker and grosser violence. It starts bloody and ends bloody. And in between? You guessed it. More blood. There’s a dose of social commentary, too, about how obsessed we are about body image and how far we’ll go to achieve the perfect body—but only as long as we don’t have to work for it or sacrifice our appetites.

Dr. Trevor Adams, who is less ethical than Dr. Conrad Murray, has invented the “perfect” weight-loss treatment. He’s found a way to transplant pygmy shrew DNA into his A-list clients, giving them metabolisms so fast they no longer store fat. They can eat anything and everything they want and still shed a tremendous amount of weight in just days. Problem is, they have to eat every two hours or they’ll die. They also develop fangs tipped with a red iron ore and saliva that contains a paralyzing neurotoxin. Their hunger becomes so insatiable that once they clean out the fridge and the pantry, they start feasting on their pets and loved ones. Dr. Adams and one of his colleagues from the Aphrodite Aesthetic Reconstruction Clinic attempt to contain the problem. But when the pygmy DNA spreads to the general population, the irresponsible doctors have a cannibal holocaust on their hands.

Voracious is a wild, gory ride sure to sate any sicko’s appetite for splatterpunk. Don’t look for character development or believability here. Gore and gross-outs are the main course, appetizers, and dessert. Wright never shies away from the grisliness. He lays it all out, bite by bloody bite. Like when a politician eats his baby son or when a woman eats her boyfriend’s penis. Irreverent, relentless, extreme, Voracious will have your stomach churning but your hand turning those pages.