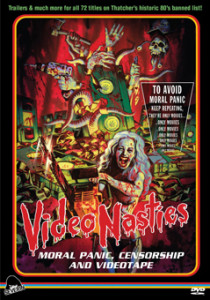 It may be hard for you younger horror fans to believe, but just a few decades ago in the 1980s in the UK, you could be arrested for selling or renting a copy of Evil Dead on VHS. Yes, for real. Now I normally associate such overly vigilant and downright crazy, “defenders of moral virtue” with my good ol’ U. S. of A, but the UK has always had their share of “we know what’s best for you” jackasses too, only they are usually less bible-thumping and more stuffy than their American cousins. Well in the 1980s, with Margaret Thatcher at the helm of their nation, they were able to have their own book burnings (or in this case, video tape burnings) that would have been more at home in 1930s Germany. It is something that is now looked back on with a fair bit of humor, but it should not be forgotten. After all, if it happened once, it could happen again, and if it happened there, it could happen here.

Keeping the memory of those crazy times alive is a cool little documentary called Video Nasties: Moral Panic, Censorship & Videotape that has now been released from Severin Films in a 3-DVD box set called, aptly enough, Video Nasties: The Definitive Guide, because not only does it have the original doc, but a ton of neat-o extras as well. I’ll get to the documentary in a second, but first, let me tell you about some of the extra goodies found here. There is a nearly hour long collection of old intros to video companies from back in the day. Why? Because why the hell not. There is also a gallery of VHS cover art for 82 horror films that, while not part of the original “Nasties list” could still be seized by the police should they see then for sale or rent. That’s all on the first DVD. The second is about “The Final 39” and were more titles that the morality police later added to the Nasties list later on. This DVD has intros, trailers, and cover art gallery for all 39 films and runs over 4 hours long! The third DVD is about the “Dropped 33”, thirty-three horror movies that were at one time on the Nasty list, but were eventually acquitted and removed. These 33 flicks also come with intros, trailers, cover art and runs over 3 hours and 20 minutes long.

Now that’s a whole bunch of extras, but how is the actual documentary?

It’s damned good. It is not as bombastic or flashy as many recent horror documentaries, it is more serious and, dare I say it, even educational. But that is not meant to be taken that this movie is boring. Rest assured horrorheads, there are plenty of bloody scenes from those Nasty videos sprinkled through this doc to spice things up a bit, not to mention some chuckles as well. Further, two of the experts interviewed in the film are two of my favorite British horror movie makers, Neil Marshall (Dog Soldiers, The Descent) and Christopher Smith (Severance, Triangle) and hearing their history with the Nasties and how they influenced them as future filmmakers, I found very interesting. Also, some credit must be given to the stuffed-shirt brigade, the old curmudgeons who were the politicians responsible for creating the Video Nasty list, and persecuted the “smut peddlers” who sold the video tapes back in the day. I don’t think any American politician would bother appearing on a little doc like this, especially when the thing they championed has largely become an embarrassment these days. So good on them, I guess?

Video Nasties: The Definitive Guide is a great boxed set that should be in the collection of any serious horror film lover, be they from the UK or elsewhere. It’s informative, entertaining, and loaded with extras, so it is highly recommended.