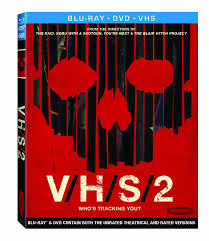 The first VHS movie was the sort of film that the more I watched it, the less I liked it. By the third time I saw it, I hated it, and gave it away to one of my friends. I never needed nor wanted to watch it again. As I write this review for the inevitable sequel, I have also seen VHS 2 three times now. And sorry friends, but I’m keeping this new Blu-ray from Magnolia because I can see myself watching this flick again, and again, and maybe even again.

The chief reason for that is thankfully not every character in this film is a reprehensible douchebag. Dear lord, did I hate damn near all of the characters in almost all of the segments of the first VHS anthology. Believe it or not, but if you populate your film with total a**hole characters, then I don’t want to watch it. Yeah, imagine that. Oh the fact that the four main stories here are also better written and directed than what came before also helps. But enough of the preamble, let’s pop this tape in and give it a watch.

Like in the previous film, there is a wraparound story that is easily the weakest thing in the movie. Here at least the two leads aren’t total d-bags (see previous rant) but it’s just the same old “people hired to find a specific VHS tape from a mysterious individual watch a bunch of random short horror movies.” Yawn. Good thing that the four main movies are much better.

The first short movie is about a guy with a missing eye getting a camera installed in his head to make up for it. Believe it or not, this is a real thing scientists are doing right now. Yes the cyberpunk age is here! This also brings up a niggling point left over from the first VHS movie, and that is why would footage from this high-tech device be on an old VHS tape? Well that bit of contrivance aside, this movie about what happens when the robo-eye starts going all Haley Joel Osment and seeing dead people, while nothing all that new, is done well and delivers some shocks and even some creepy moments.

The second segment is as simple as it is surprisingly effective. In it a guy is riding his bike with a camera mounted on his helmet (because yeah why not?) when he stumbles into the beginning of the zombie apocalypse. He is quickly bit, becomes infected, and the turns into one of the cavorting corpses everyone loves. So the idea here is a dead-eye view of your standard zombie movie. Like the previous short, it’s nothing revolutionary, but what it does, it does well and it was enjoyable.

The third time is easily the charm here, as “Safe Haven” is the standout short of VHS 2 by leaps and bounds. It is so good that it alone is worth getting this Blu-ray for. Co-written and co-directed by Gareth Evans, the guy that gave us the excellent 2011 action flick, The Raid: Redemption, this movie is about a news camera crew getting inside access to a weird cult in an attempt to uncover the truth behind some of the strange rumors about it. To tell you anything more would be doing this movie a disservice, so all I’ll say is make sure you see it. It’s a hell of a good watch.

The fourth and final short is probably the weakest one, but even it is leaps and bounds better than the majority of the first VHS. Sadly, it does have a bit of that other movie’s feel as there is quite a bit of douchebaggery going on here. That said, most of the cast are young teens or preteens, so I guess some of it can be forgiven. If I told you the title for this one it would completely give everything away, so I’ll just say it’s about some kids having a sleepover that gets crashed by some unexpected visitors. Warning, there is one bit of implied violence toward animals in this, so those especially effected by that, be warned.

Now on to the extras on goodies found on this Blu-ray. First, there are two versions of this film here, the R-rated one people might have already seen, and a new unrated version. There is a filmmaker commentary where all the various people behind all the individual shorts recorded commentary for their individual films and then someone edited them all together. That may sound haphazard, but it actually works out well here. There are also a number of featurettes here, such as a short (under two minutes) behind-the-scenes bit for the wraparound story called “Tape 49 Rewind”, a two and a half minute interview with director/actor Adam Wingard called “Dissecting Phase I Clinical Trials” about the camera eye story, a three and a half minute featurette on the best movie of the bunch called “Inside Save Haven”, while the six minute “Behind the Lights” is about the alien short, and last and certainly least are three minutes camera phone video of guys pushing down a dead tree (?) for the zombie tale in here because…yeah. A three minute press kit, photo galleries, and trailers bring this rather short (as in overall length) list of extras to a close.

VHS 2 is a big improvement on its predecessor in both storytelling and filmmaking. Most of the characters, if not always likable, at least are not annoying. The stories are nothing groundbreaking, but it is more than competent across the board, and in one instance, truly amazing. It’s gory fun with some occasional nudity (always fine with me) and some effective chills and shocks. So I can easily and highly recommend it to all fun loving fright fans out there.