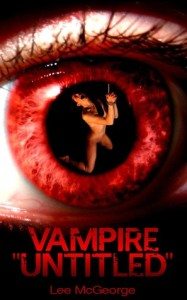 The first novel in a trilogy, Vampire “Untitled” has journalist Paul Mc Govern take a trip to Romania where he comes across a Christian shrine and a grave hidden within dense woodland that, legend tells is the grave of a vampire. Being the rational sceptic, Paul thinks the locals are hiding the truth of a bloody murder, but is he right?

Vampire “Untitled” and Vampire “Unleashed” are the first two books in the series that focus on Paul and his brush with the supernatural world of vampires. What starts out as a good idea from Jade, his new publisher to go visit Romania in order to write a series of novels on vampires turns into a dull time for our hero. As all good writers know, they have to do a vast amount of research and Paul thinks it will be like a holiday for him. That is the situation until he gets there. He ends up in a place called Noua when he intended to visit a place called Brasov and only finds out he has made a mistake when he meets a local girl by accident. The room he has paid up front for is cold, terrible, and oppressive and doesn’t come with hot running water and hasn’t had for four years. So far, Romania hasn’t given him any reason to stay, but he does his best to make do, if that is the right word.

Remembering the character’s stay in Neil Gaiman’s Shoggoth’s Old Pecular story Paul acts a bit like Benjamin Lassiter; a man in a foreign land trying to adapt to his surroundings. It isn’t long before Paul’s search for vampire folklore turns deadly serious when he meets a man who tells him of the real strigoi who can influence human males into committing unspeakable acts against their friends and family. Though the men this evil entity comes into contact with were once normal, it changed them into a cruel, ravening beast. Forget the Hollywood movie appearance of the modern vampire, this is far more believable. Just think of a man who develops rabies from a wolf or diseased dog, it is as easy as that to get it from a strigoi, and it is only the men in this story who can get the disease.

This is not so much the tale of a vampire, but of a man who is slowly taken over in mind and body by a supernatural entity and at first he can feel what “it” feels, and even though he knows the abnormal thoughts he has are wrong the strigoi side that has took hold and become a part of him is inside of each and every one of his thoughts. It is easy to be taken on a long and bloodthirsty journey by this book as it is gory and graphic in places as the strigoi side of Paul’s mind plays out like the mental thoughts of a serial killer. Paul’s view of Romania does little to convince other would-be travellers to visit there even for a longer stay , butat least as Lee Mc George’s novel acts as though they exist in a Hammer Horror movie Christopher Lee would be proud to act in complete with  stake-happy locals and residents who you’d never want to meet. As this is the first in a trilogy, I look forward to what Lee has in store for readers. This one piqued my interest in his raw writing style.