Upon My Worst Enemy – Book Review 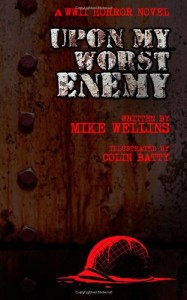 Upon My Worst Enemy
by Mike Wellins
Release Date:  January 27, 2014
Publisher:  Freakybuttrue
Reviewed by Matthew Scott Baker
I can’t recall if I’ve mentioned this or not, but I love historical horror.  The concept of inserting a terrifying story into living history takes a true talent, but I’ve read several stories and books over the years that pull it off with ease.  Such is the case with UPON MY WORST ENEMY, a recent release from author Mike Wellins.  In this novel, Wellins uses World War II as the backdrop for his horror yarn, one of my personal favorite time periods in history.  And although the book is not perfect, it is a hell of a read and one I highly recommend.

If you are not familiar with UPON MY WORST ENEMY, here is the plot synopsis:

Toward the close of World War Two, a foundering, lone German Uboat runs aground on a tiny nameless island in the North Atlantic. Just miles below the arctic circle, the German U-boat captain finds himself and his surviving crew stranded on a hostile rock in the middle of the frozen, pitching sea. Their ship destroyed, their supplies ruined, the German sailors quickly discover that they aren’t alone on the barren island. A small squad of Navy engineers, the working Seabees were already on the tiny island to build a small radio repeater station for the allies. With no place to retreat to, the two foes will face off in a brutal battle of attrition on the inhospitable island. The only hope for the Germans and the Americans alike is to survive long enough to meet the ship that is scheduled to pick up the Seabees, once their task is completed. The American squad is outnumbered, but far better prepared for battle and the deadly conditions. Neither side, however, could ever have been prepared for the third inhabitant on the god-forsaken rock.

I’m not sure what it is about horror stories set within wars that enthralls me, but there’s something about the idea that sets my interest ablaze.  Maybe it’s because war is such a horrific thing to begin with, and adding another terrifying element to that compounds it so; or maybe it’s because war can bring out the best and worst of humanity, which makes the perfect companion to the premise of a horror tale.  I don’t know.  But regardless, I enjoy the concept greatly, and this book is a welcome addition.

UPON MY WORST ENEMY is written fairly well, although I will confess there are bits of clunky prose here and there.  The storyline is fluid, however, and the plot never bogs down.  Wellins writes with a unique voice, an attribute which deepens the immersion-factor into the story.  I particularly like this aspect, as it allowed me to fly through the book and finish it within two days.

The characterizations are sufficiently in-depth, and I never once balked at the actions of any of the soldiers.  Wellins creates original and well thought-out individuals, not stereotypical personas that readers can find in thousands of other books.  This is yet another big plus and one more reason to enjoy this title.

My sole complaint about UPON MY WORST ENEMY is the editing.  I ran across several missed edits, including commas in the wrong place, omitted words, and words used incorrectly (i.e. ‘son’ instead of ‘sun’).  This is, however, very forgivable in a self-published piece like this; authors cannot necessarily afford to hire an outside editor, therefore they have to do the cutting and fixing themselves.  And I speak from personal experience when I say editing can be a very difficult thing to do, especially if you are dissecting your own work.

UPON MY WORST ENEMY is a great book and very enjoyable read.  I recommend it to fans of horror or anyone looking for a nice, temporary escape (the book measures in at 230+ pages, and it’s a fast read).  It is available now in a variety of formats.