Up from Soil Fresh – Book Review 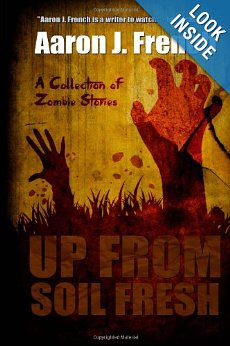 Up from Soil Fresh

In general, zombie stories are not directly about zombies. There are exceptions, of course, such as Patrick Freivald’s engaging zombies-in-high-school novels Twice Shy and Special Dead, which depart from the ‘traditional’ narratives in a number of intriguing and entertaining ways (both are delightful reads, by the way), even to the extent of giving readers a vivacious, if mostly dead, point-of-view character.

More usually, however, zombie stories accept the basic fact that zombies, no matter their origin, are in fundamental ways no longer human—they show little if any intellectual ability, they are driven by purely irrational and irresistible urges to devour human brains (and other body parts as available), and perhaps most tellingly they are indisputably dead.

For these reasons, zombie stories tend to use the creatures more as a backdrop than as fully functional (or dysfunctional) characters. In Joe McKinney’s award-winning Dead City novels, for example, the stories gain their power by juxtaposing the everyday and the horrific: Ordinary people must suddenly confront the unbelievable as zombiism strikes. It is their conflicts, however, that make the novels work, not the mere presence of the walking dead.

In Aaron J. French’s short (but highly readable) collection, Up from Soil Fresh, his eight tales of zombies-run-amok attempt something unusual—they range from stories told explicitly from a zombie’s unique and rather unpalatable perspective (“Up from Soil Fresh”) to something approaching the darker boundaries of high fantasy, in which the focal creatures are mostly relegated to the background while most of the emphasis falls upon the Grandmaster Wizard and his endless struggle against the Light (“The Shadow of Light and Dark”).

These bookend pieces frame tales that explore the endless possibilities of life, death, and everything in between…and beyond—perhaps my favorite being the evocatively and highly appropriately named “—Rot—Rot—Rot—,” in which the title wonderfully encapsulates the essence (malodorous and gooey) of the story that follows. “The Viewing” and “Mother” touch as much upon the psychology of the living—in both cases sons of deceased mothers—as upon sudden grisly horrors. “The Carpetbagger” incorporates not only the walking dead but an apparent immortal capable of transporting through time and space…along with such Old West staples as saloon girls with hearts of gold and vicious locals looking for—and finding—trouble. In the remaining two stories, drug dealers and hypocritical ministers take center stage. But no matter the story, zombies hover persistently around the edges of humanity, eager for their moment in the light and their mouthful of human brains.

French has done a good job in crafting mostly short, often jarring, always interesting stories. His writing is solid, never distracting from the stories. His shambling abominations are tinged with just enough humor to keep the collection from sinking to a depressing sameness but not so much as to overwhelm the essential horror of his subject. Freshly imagined, freshly told, the tales are indeed Up from Soil Fresh.