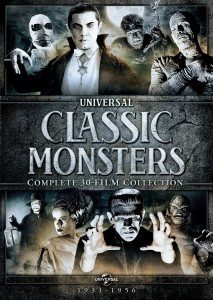 Look, just get this.

What, you need more than that? It’s all of the classic Universal Monster movies from 1931 to 1956, all in one beautiful box set. It has all the movies you think of, and a whole bunch you’ve forgotten about. This is a mandatory must have for any fan of classic horror movies, and because it’s so massive, I’m not going to discuss all 30 of the movies here. But I will give you the awesome lineup, just to blow your hair back a little.

Now that’s a whole lot of movies! And yes, three Abbot and Costello movies are thrown in for good measure. I love me some A&C, and I love the majority of these classic fright flicks. Sure, not everyone is a winner, but there’s 30 of them! You really can’t ask for anything more if you’re a Universal monster fan. Oh, well I guess you could as for some extras and special features. Thankfully, this box set doesn’t skimp in that department either. It’s got hours and hours of extra goodies on here, chief among them is a whole other movie; the critically acclaimed Spanish version of Dracula. So technically this set has 31 movies in it. It also has 13 audio commentary tracks, featurettes on Bela Lugosi, Boris Karloff, Lon Chaney Jr., and legendary monster makeup artist, Jack Pierce. There are a bunch of behind the scenes documentaries on many/most of the movies, archival footage, still galleries, trailers, and more.

Have I said enough good things about this new box set yet? Because when it comes to bad, I really don’t have a lot to say. This one is beyond highly recommended. As I said before, this is a must have. This year there are a few big, nice movie sets to choose from, but they all pale in comparison to this one. Yeah, it is that damn good. So once more, just in case you missed it the first time: get it.