Undead& Unbound: Unexpected Tales From Beyond the Grave – Book Review 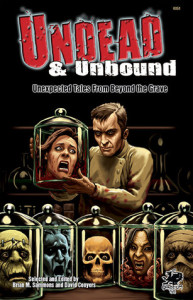 Undead& Unbound: Unexpected Tales From Beyond the Grave

Undead & Unbound: Unexpected Tales From Beyond the Grave is an anthology of horror stories about the living dead, released as part of Chaosium’s expanding line of fiction. Chaosium, best known for the iconic Call of Cthulhu RPG, has been increasingly visible in the anthology community, producing some books that are specifically Mythos-based, and others that are more general in theme. This is the first of their non-RPG products I have read, so I can’t comment on the line as a whole or how typical the volume is related to their other fiction products. The book itself is nicely bound and formatted, with attractive cover art by Paul Alexander Mudie that evokes the classic era of horror film.

The first question one might ask about an anthology like this is “do we need another collection of zombie stories?” First of all, yes, but let’s eliminate any misimpressions right away: Undead & Unbound does have its fair share of zombies, but the nineteen stories within cover a broad range of things from beyond the grave, both familiar and more obscure. A strength of the anthology is that the editors have worked to include a variety of living dead, including some from other cultures (the penanggalan of Southeast Asia) and unique interpretations of the tropes of Western horror. They also span historical periods and geographic locations, from the American Old West, to the North Pole, to future Mars. The contributing authors have been given the freedom to re-interpret and reinvent in ways that keep the usual suspects of undead fiction from becoming stale, and also produced some new forms strange and delightful. The tone of the stories varies significantly as well, with some written with dark sensibilities and others more comic. Overall the material skews dark, with some graphic violence and mature content not appropriate for the young. There are no sparkly vampires or the like within.

The table of contents includes a range of established and upcoming writers, who hail from the U.S., U.K., South America, and Australia. I do like to see this international flavor as some diversity of cultures enriches the anthology overall. There is a high proportion of authors who are involved in the horror genre as editors, publishers, and literary critics in addition to being writers themselves, and I think this shows in the frequency of nods to other sources, both popular and obscure. As a reader, I have the sense that the authors know and love their undead well, and would be a formidable team on Horror Jeopardy.

As for the stories themselves, the writing is generally very effective, and several of the stories are really remarkable.  Although I don’t like to name names in anthology reviews, there are some that have a very resonant emotional impact in the way the characters live with their dead, or struggle to understand and survive the nightmare of the supernatural.  There are, at most, one or two that I took issue with based on writing issues. Because the stories do not share a common tone, they may not all be to the taste of individual readers. Some people don’t like comedy mixed with their noir; some like their horror broadly apocalyptic, some more personal. However, readers who like the undead and know something of the history and classics of the genre will find stories here that they enjoy.

[Full disclosure: I have two stories contracted for future Chaosium anthology releases. This does not affect my opinion of the current work.]