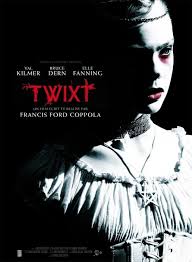 Vampires, child killers, ghosts, haunted nightmares, murders most foul, and Edgar Allen Poe; these are the thrilling elements in the new film by Francis Ford Coppola.

Coppola has given us some of cinema’s finest films such as The Godfather saga, Apocalypse Now, The Conversation, The Cotton Club, and Rumble Fish. All of these films solidify his place amongst the greatest directors in film history. A numerous Academy Award nominee and four time recipient, Coppola is not as well known for horror films, as he only made two; the underrated 1963 axe murder film Dementia 13 and the 1992 oddity Bram Stoker’s Dracula. In the former, Coppola used shadows and extreme scenes of violence to bring forth the terrors on screen. In Bram Stoker’s Dracula he played with visual styles and used shadow puppetry and the presence of shadows themselves to great effect.

In the later part of the eighties and for the 90’s and into the new decade, Hollywood no longer catered to the “old school” filmmakers who took the craft of film and made art and this caused Coppola to become a “director for hire”, doing films that were written by others and were now looking for a director.  Dracula was a huge success but his subsequent films, the 1996 travesty Jack and the 1997 well done, but way beneath his talents, potboiler The Rainmaker failed to catch fire at the box office.

After many years producing films, including his daughter Sofia’s Oscar winning masterpiece of human connection Lost in Translation, Coppola was reinvigorated by watching younger filmmakers do wonders on small budgets. He vowed to start the next phase of his career as an experimental filmmaker and make only the films he wanted to make by writing, directing, funding, and distributing them himself.

His first effort in the “new way” was 2007’s Youth without Youth, an extremely confusing art film. This was followed by 2009’s Tetro about two brothers in Spain. It was a much better film and showed a true experimental spark in the way Coppola chose to convey emotionless people by using black and white yet filming many scenes in stark sunlight. Slowly and carefully, Francis Coppola was beginning to play with color schemes once again as he had done so successfully in most of his films throughout his career.

Now we have his return to the horror genre with Twixt, a film about a writer of horror novels named Hal Baltimore, played by Val Kilmer in a performance that reminds us of how great of an actor he can be, who has fallen on hard financial times and is going on a small and seemingly unsuccessful book tour. A recent tragedy within his own family has caused strife in his marriage and has stifled his creative process. His daughter has been killed in a boating accident. Consumed with grief, Baltimore arrives in a small town and meets Sheriff Bobby LaGrange, played to the creepy hilt by the great Bruce Dern. LaGrange entices Baltimore to investigate the murder of a young girl and co-author a book based on the subject. This leads Kilmer’s character on a nightmarish journey through a dream world populated by vampires, ghosts, and suspects galore. When Baltimore dreams, he meets a young girl named V, played by Elle Fanning. She takes him on a nocturnal journey through a truly frightening scenario of a Pastor who murdered children, including her; and all the while, Baltimore’s dream guide is Edgar Allen Poe, played by British actor Ben Chaplin. Holding a lantern and basking in its ghostly glow, Chaplin makes Poe a spooky guide through Baltimore’s alternate dream world.

There is a lot to like about this film beginning with the look. Coppola, working with cinematographer Mihai Malaimare Jr., Art Director Jimmi DeMarcellis, and Set Designer Katherine Covel, has created a nightmarish and beautifully ghoulish look. The scenes of horror and the dream sequences are reminiscent of German expressionist filmmakers.  In the dream sequences, Kilmer walks through a world of black and white and when he meets Fanning’s V she is bathed in an alabaster white with her lips a sharp and bloody red. A sequence where Kilmer dreams of the murders is done in the same lighting style, as is a dream where he visits a hotel that hides violent secrets. I feel this film’s visual styling to be more interesting than Coppola’s Dracula, which is lauded for its visual adventurousness. Here he masterfully conveys mood through color.

The performances are very good. Elle Fanning is ethereally beautiful as a ghost with a secret of her own. Bruce Dern plays the sheriff as an opportunistic, wannabe writer who dreams of being famous. The real treat here is Val Kilmer. He has always been a fine character actor. He broke into the realm of Oscar caliber acting in Oliver Stone’s 1991 masterpiece The Doors and in 1993 gave the performance of his career, and one that should have won him an Oscar, as Doc Holiday in the western classic, Tombstone. Since that film, with the exception of Batman Forever, Kilmer floundered around in so-so films until succumbing to the dreaded straight to video market early in the new century while showing up only occasionally in bigger films. Here, although this is a small film, he gives his best performance since Tombstone as he plays Hal Baltimore with wit and an underlying sadness. It is nice to see him acting again.

At times, Twixt seems to be an intimate film for Coppola. Baltimore’s creativity has been stifled by the death of his daughter in a boating accident just as the death of Coppola’s eldest son Giancarlo coincided with his own career decline. Coppola has spoken about trying to be original and creative when the “well” runs dry and he examines those feelings in a very real way through Hal Baltimore.  The scenes where Baltimore is transported into his alternate consciousness interacting with ghosts, vampires, and Poe are brilliantly handled as he is given all the tools for his next novel. His creative juices return through his investigation of the child murders and the guidance of his literary hero.

Coppola gives his film the feel of an old movie from the late sixties or early seventies, even having his American Zoetrope logo looking dated when it appears at the beginning. This is a nice touch as the story and style lend themselves to a schlocky genre aura, but our director lifts the film to a higher level through his visual mastery. He has fun with the material while infusing it with a solid examination of an artist in turmoil. Yes, this is a horror film but it exists on a more existential level at times.

Twixt is a macabre, visually stunning, and extremely entertaining horror film from one of the world’s great filmmakers. It is a must for fans of Coppola, horror enthusiasts, and lovers of great cinema.