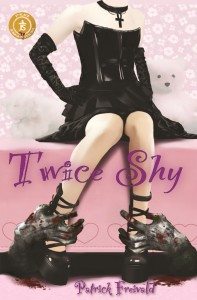 Ani just wants to be a normal teenager, but hiding deep down is a secret she can only share with her mother. Which in turn, results in way too many rules: be part of the emo crowd, stay covered, only limited sunlight, take formaldehyde baths, get good grades, no secrets, and never ever tell anyone that you are a zombie. All of which is easy, if you’re ok being called a freak. Not to add, the one boy you have ever liked can’t stand looking at your new emo style and his girlfriend is determined to make your life miserable. Life would be simpler, if only she could keep the thought of brains off her mind. The serum her mother (Doctor and scientist) creates helps a bit, and even keeps the decaying process down but it still isn’t a cure. Leaving Ani with the illusion of a normal teenage life with her piano, job , and finding simple ways to distract her from eating brains.

However, Ani’s life starts to change when Dylan, local creep and obsessive emo boy, turns his obsession onto her and discovers the truth. This turns Ani’s life into chaos, threatening the very life she has grown to tolerate.

With love and hate and hate again, Ani’s heart is constantly tugged between her junior high crush Mike and his toying affections, while his girlfriend Devon goes to any length to make sure Ani knows who’s boss, causing a cat and mouse chase with her heart that doesn’t even beat. All leading up to one explosive ending that leaves the door open to its sequel.

Patrick Freivald captures the essence of a teenager with great dialogue, true problems and the angst of complicated love.   He addresses real social issues such as: cutting, drinking, and acceptance at any cost. I was pleasantly delighted by the unusual and creative spin on capturing the zombie essence.  He adds a little teenage undead drama, with all the gory details one would expect there to be in a good zombie classic.

Hellnotes disclaimer: JournalStone Publishing is the parent company of Hellnotes.com.