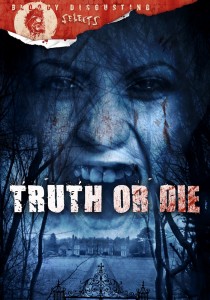 Confession; I love cheap, schlocky, horror films. You know, the kind that have no redeeming value other than to give us a good jolt of fun for 80 or so minutes. They were the kinds of horror films I grew up on in the eighties and, sadly, they don’t make too many successful ones anymore. When I find one that looks interesting I see it immediately and hope for a raucous good horror thrill. Films such as One Dark Night, Twinkle Twinkle Killer Kane, Chopping Mall, Rawhead Rex, and Basket Case are glowing examples of fun horror flicks from the eighties that were done on the cheap. These films are no classics but they have a certain charm and feel that low budget horror quickies have lost throughout the years.

Fact; most of the cheap horror films these days are bad. While I see many, I am frequently disappointed but vow to never turn my back on the small, low budget, fare that I believe holds some true gems…if you can find them. My search continues.

Truth or Die is a horror film that wants to be both an ode to the “dead teenager” low budget scare flicks of the eighties while blending in the ideas and settings of today’s horror.

The film tells the tale of five college students who find themselves invited to a birthday party thrown by one of their classmates, Felix. The party is in a remote cabin deep in the woods, of course. When the cast arrives they are greeted by their friend’s brother, an ex-military man, who explains that Felix cannot attend the party due to a mysterious circumstance that I won’t mention here. He invites them in any way for champagne and soon ties them up, forcing them to play a deadly game of truth or dare.

Directed by Robert Heath, who is doing his first horror film after two low budget British thrillers, Truth or Die has a nice low budget charm for a while but succumbs to the trappings of most modern horror efforts; predictability, repetitiveness, and the mistake of believing that watching young people tortured and screaming for 90 minutes is entertaining. I have spoken that extreme violence toward people in horror films can be entertaining if done with style, originality, and a sense of purpose dictated by the screenplay. Here it is just another in a long line of films where we listen to characters scream at the top of their lungs as others are being slaughtered before their eyes. The tone is too serious here for us to have fun.

There is a reason, and I would say a “twist”, for what is happening to these characters, but once it is revealed it is a rather pedestrian and tired ploy, not to mention the fact that you see it coming long before it happens. The surprise is truly no surprise at all.

As far as the characters, not one of them is likeable, and the actors who play them will, most likely, disappear from the film world, as they are all terrible. I have said this numerous times; if you want us to be shocked by a character’s death or feel suspense at who is going to be the next to die, you must write interesting and somewhat likeable characters! After thirty minutes I just sat there waiting for all of these idiots to die so the film would end.

Truth or Die has a few important elements in place as it tries to be an ode to eighties fright flicks. We have the college age youth, the cabin deep in the woods, and the creepy old man who warns them not to go there. Unfortunately, from there we are left with nothing but a carbon copy of the Saw franchise and not a very good one at that.

Filled with too serious a tone, obnoxious and unlikeable characters, a bland screenplay filled with unoriginality and a conflicting sense of what genre it is paying homage to, and a rather silly title, Truth or Die is an unsatisfying horror film that will quickly fade from memory.