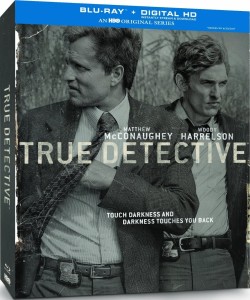 There, that’s all you need to know about this amazing new show from HBO. I mean come on, chances are, if you’re any sort of horror/detective fan at all, you’ve already seen it. Hell, even if you just like plain old great television, you must have seen this. This was THE show for the short eight weeks it was on. If you haven’t seen it, then you had to have heard all about it. This was prime water cooler talk. No show I can remember hit this hard, this fast, and wrapped everyone up in its dark and disturbing mystery as this one did. So this might be the most “preaching to the converted” review I’ve even done. But, in the off chance you have yet to watch this deeply dark and wonderfully good show, I’ll be happy to give you the nickel tour of this southern fried hell.

True Detective is about two cops in 1995 Louisiana tracking down a killer of woman. Sound pretty standard, right? Well before the first episode is over there will be some sever occult overtones to the murder that really adds to the creep factor. Then things get worse as it becomes clear that the young woman found bound with antlers on her head is not the first victim, nor is she the youngest. Still not enough ick for you? Well how about the very real possibility that a cult did this, and one with a lot of old school power and friends in high places to back them up. By the time Carcosa and the King in Yellow start getting namedropped (yes, you read that right, weird fiction fans) you know you’re in for one hell of a dark, twisted ride.

The show also takes place in 2012, as the events unfold in non-linear fashion. Both of the crusading cops from the 90s are now out of the police force, each suffering from their own form of burnout. They’re pulled back into the darkness as the case they thought they put paid to is far from over. The horror that they barely walked away from the first time is more extensive, and far worse, then they ever thought. And this time, not only may they not be able to stop the bloodshed, they might not be able to walk away from it.

So the show starts off with a rock solid base of a well written, and very twisted, story by series creator, Nic Pizzolatto. Add to that some truly amazing and cinematic direction by series director, Cary Fukunaga, and that base becomes positively unbreakable. Cary has amazing skill with the camera and I can see him making a big name for himself in the movie biz easily and rapidly. Last, but in no way least, are the two awesome, career highlight performances by the two leads; Matthew McConaughey and Woody Harrelson. Both of these very fine actors have never been better than they are here, each playing a perfectly detailed, believable, and flawed character. Even if this was the run of the mill cop show without its dark, occult flavor that I love so much, I would still watch it just to see McConaughey and Harrelson acting their asses off.

On to the goodies and extras on the discs. Unlike other cable stations *cough* *cough* Showtime *cough* HBO never skimps on the special features when it comes time for them to release their original shows on disc. True Detective is no exception to this rule. Here you will find a short “inside the episode” behind the scenes bit for every episode. Two of the episodes have audio commentaries. Why only two? I don’t know, and honestly I would have liked to have more, but two are better than none. Likewise there are just two deleted scenes from two other episodes. But HBO makes up for that with a short behind the scenes overview of the series, and a collection of interviews with stars Matthew McConaughey and Woody Harrelson on their characters, various episodes, and general aspects of the show.  Lastly there is an interview with series creator Nic Pizzolatto and music director T Bone Burnett.

True Detective is an amazing TV show that succeeds on many levels. It’s a dark mystery full of cop drama for the crime junkies out there. It’s got murder and madness for the horror lovers. It’s got Carcosa and the King in Yellow for all the Ambrose Bierce and Robert Chambers fans. It’s got sex appeal, blood, great acting, amazing direction, and more. In short, it’s got everything. I cannot rave about this show enough or recommend it any higher. As I said at the beginning: Get it now.