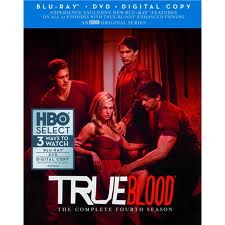 Time for some more hot, sexy, bloody, and funny vampire action with Sookie, Bill, Eric, and all the rest of the gang from the tiny little Louisiana town that just so happens to be the nexus point for all things supernatural happening in the world. Or at least, that’s how it always seems. Yes, this is now the fifth year of HBO’s fangtastic show, and the question is; is it still as good as it was, or has it succumbed to the eventual decline that almost all TV shows seem to fall into? Well I guess that depends upon who you are.

You see, True Blood has one hell of a rabid fan base and after five years you already know if you’re a fan of it or not. If you are, then rejoice because here’s some more southern gothic, supernatural romance for you to sink your teeth into. So in essence, this is one of the easiest reviews for me to do, as I’m largely preaching to the converted if you’re still reading this. But hell, I’ve got a job to do, so grab your silver chains and your favorite artificial blood beverage; we’re going way down south for some vampire goodness.

Last season was all about magic, and this one is all about faith. Faith in people when it looks like they have majorly lost their way, and faith in divine beings. Now that’s common for many shows, but what is not too common is when murderous blood-fiends find religion. Even if it’s a religion based on slaughter.  To this end, the Vampire Authority, the ruling body of vampires, play a huge part in the story. Unfortunately, this shifts much of focus from a lot of the supporting characters who have been part of the show from the beginning. There are only so many minutes in an episode, after all. Season five also brings back a villain from the past, one that was just so fun, and yet here he is poorly utilized and almost neutered. Lastly, some of the main characters take some wild turns only for the sake of plot contrivance. Instead of adding anything of merit to the story, they just seem way out of place. It does end with a nice cliffhanger, so there’s hope season six will be a bit better than this one.

Season Five of True Blood is not the show at its best, in fact it might be the worst season yet, but it’s far from being truly bad. The show continues to be a silly, sexy, if only ever slightly scary good time and I do enjoy this show despite my better judgment. I’m not a fan of the sexy, misunderstood vampire thing that is so popular these days, but even despite that, I do find myself returning to True Blood again and again. It’s cotton candy for the brain with plenty of pretty for the eye. I know some serious horror fans hate this series, but I think such folks need to lighten up and just enjoy this show as the ridiculous, over the top, naughty soap opera it is. That’s how I watch it, and it never fails to give me a giggle.

Merits of the continuing adventures of Sookie and Vampire Bill aside, this new Blu-ray, DVD, and Digital Copy combo set from HBO is pretty top notch. There are five audio commentaries to be found here. Why only five? I don’t know, but they are pretty fun and informative and have a bunch of the cast and crew on them, including show-runner Alan Ball, stars Anna Paquin, Stephen Moyer, Denis O’Hare and more. In addition to the commentaries, there are a bunch of interviews about each of the episodes with all the True Blood writers. There is a group discussion with members of the cast and crew on one of the episodes (episode six), how it was made and various behind the scenes bits. There is an interactive guide showing all the relationships, past and present, and with five seasons and a cast this large, that gets quite extensive. There are several “authority confessionals” where actors playing the vampire hierarchy speak to the camera while staying in character about their shadowy organization. Character bios, flashbacks, flash-forwards, and other interactive hints and goodies round out this impressive list of bloody good extras.

So if you are waiting for the sixth season of True Blood to start up on HBO, do yourself a favor and pick up this fifth season to remind you of all the sexy supernatural shenanigans from last years. Even five years in it is still a load of fun that looks absolutely great on Blu-ray and comes packed with a gaggle of great extras. If you have yet to catch this show and want to jump on the True Blood bandwagon, this is not the season to do it. There’s too much inside baseball here for newbies. However if you’re a diehard fangbanger, you’ll still get a kick out of this season, although you have probably already seen it by now.