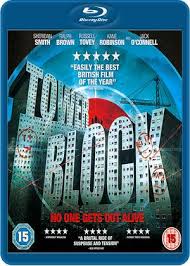 From the UK comes this suspense thriller set in a low-rent block of apartments. This multi-floored building is being cleared out in preparation for being demolished, with the sole exception being the tenants on the very top floor who have yet to leave. One night they witness the savage beating death of a young man and no one, save one woman who is our hero of the piece, lifts a finger to help the victim. And after receiving her own beating, even she refuses to talk to the police about the crime, afraid that if she does, the same thing could happen to her. Jump ahead several months later and someone decides to teach the silent witnesses a deadly lesson on the price they must pay for their apathy. This faceless avenger/psycho blocks the doors, kills their cellphone reception, booby-traps the elevators and stairs, and begins to pick off the apartment dwellers one by one with a sniper rifle. Fear, desperation, and the body count builds nicely until the end of the film.

I had heard nothing about Tower Block before getting the Blu-ray in for review from Shout! Factory, but just looking at the plot synopsis on the back of the BD case didn’t fill me with much anticipation for watching it. The story seemed like the basic premise for a dozen or so modern thrillers that I’ve already seen, and while some of the beats are the same here, it’s the execution of this movie that sets it apart and really had me enjoying it. First and foremost, the acting is all topnotch, and even background characters that are eliminated quickly are written well and seem believable. That amount of care and detail is essential if a movie will focus on a small cast for the majority of its runtime. That goes double for a film where those characters are placed in jeopardy, because if you don’t care about the people in danger, then you won’t care about the movie as a whole.

Another thing that I really liked about this film was how realistic it seemed, with two exceptions that I’ll get to in a moment. Usually in flicks like this, the bad guy is some omnipotent super-genius that has seen every possible angle and outcome miles before anyone else. That is done to keep the targets of the villain’s wrath in the killing ground and to keep them from escaping until the end of the movie. However, there is only so far I can suspend my disbelief, and most movies like this end up breaking that suspension too quickly. Tower Block did not do that. Everything the mysterious sniper does here seems plausible. In fact, only two things here had me going “Hmmmm, really?” The first was the contrivance that the only people left in this apartment building just so happen to all be together on the top floor, thus isolating them, keeping them together, and putting them as far away from escape and safety as possible. The more grievous offender was the sniper who seemed to be able to shoot people on all sides of the building. For example, if someone looked out of a west-facing window, they got shot. If someone looked out of an east-facing window, they were shot. If character went up to the building’s roof, then the sniper can shoot at them, thus meaning that he would have to be as high or higher than them. If someone makes it to the ground floor then the sniper can shoot them too. It was as if the sniper was on some magical, moving, floating platform. This did mean the movie started to dip into omnipotent adversary territory, but I could forgive it that one indulgence based on the strength of the rest of the film.

Thankfully, we in North America have the awesome Shout! Factory that brought this British import to our shores. Their new Blu-ray release of it not only contains a beautiful transfer of the film, but a couple of nice of extras to boot. No, this disc isn’t loaded up with goodies, but most foreign films brought to the U.S. don’t even have what this disc does, so I was pleased to see that an audio commentary and a brief collection of interviews was included here. Yeah stuff like that should be commonplace in this day and age, but you would be surprised how many releases are still put out as bare bones discs.

Now to be sure, this flick is a solid thriller, but it’s not really a horror film. However true fans of horror will find enough suspense and tension (you know, things that good horror movies should have in them) to keep them watching. There are even some bloody kills that might appease the splatter fans a bit. Also the faceless killer and the one by one murders of the characters has more than a passing resemblance to a slasher flick. It grabs your attention early on and holds it until the very end, and so for that I can easily recommend Tower Block to all thriller fans.