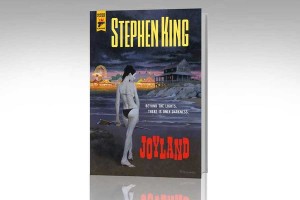 Stephen King’s new novel JOYLAND, published as a paperback original on June 4 2013, by the award-winning Hard Case Crime line from Titan Books, is released in tandem with three hardcover limited editions for collectors, two of them signed by the author.

Set in a small-town North Carolina amusement park in 1973, JOYLAND tells the story of the summer in which college student Devin Jones comes to work as a carny and confronts the legacy of a vicious murder, the fate of a dying child, and the ways both will change his life forever. JOYLAND is a brand-new book and has never previously been published. One of the most beloved storytellers of all time, Stephen King is the world’s best-selling novelist, with more than 300 million books in print.

All three hardcover editions feature both a new cover painting and nine black and white interior illustrations by the legendary Robert McGinnis, the painter responsible for more than 1,000 classic book covers as well as the iconic movie posters for Breakfast at Tiffany’s and the original Sean Connery James Bond movies. JOYLAND is the first book ever fully illustrated by McGinnis, whose 70-year career includes induction into the Society of Illustrators Hall of Fame alongside Norman Rockwell and Maxfield Parrish. In a nod to the look of classic paperback crime novels, the hardcover editions also feature a map on the back cover, drawn by Susan Hunt Yule, of the Joyland amusement park where the story takes place.