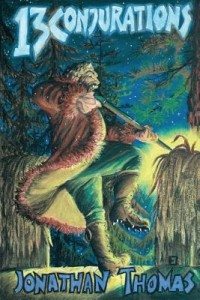 With the release on Jonathan Thomas’s third collection, Thirteen Conjurations, from Hippocampus Press, it becomes obvious that Jonathan Thomas, as suspected from his first two collections, Midnight Call (2008) and Tempting Providence (2010),  could not write bad story on a bet. The thirteen stories in this book only emphasize his ability to seamlessly switch from social commentary with Lovecraftian undertones to satire of the over-saturation of the airwaves with paranormal “reality television.”

The book is divided into three sections, the first being for four contributions to the Lovecraft mythos. The second section, “From Elsewhere” is six stories, several of which paint a sense of atmosphere and impending doom so eloquently they could easily be considered Lovecraftian as well. The final section is “Swedish-American Triptych,” three tales of Americans who visit Sweden and encounter things justifiably not mentioned in the travel guides. My only complaint of the entire book is the term triptych. A triptych is a piece of art composed of three panels. It is indeed art, but the stories, to me, do not have the degree of interconnectivity among the stories that the term would imply. It is a veryt minor complaint at best.

Even in a collection of outstanding stories, Thomas manages to raise the bar, even onhis own work. “A Retouch in Camonica,” tells of a tourist who stops in a small town on a whim. He wanders afield at an Italian archaeological site and discovers both the enduring qualities of antiquity and that there is more than one definition of the expression “tourist trap.”  Other personal favorites include “Election Roundup,” confirming what we all have suspected about politicians all along, and “Pictures of Lily,” a haunting tale of an ill-fated romance between a frame maker just treading water and a mysterious artist who takes the Providence art scene by storm.