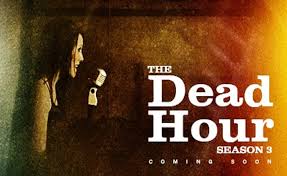 After a year’s hiatus, the third season of the horror anthology series “The Dead Hour” has finally arrived. The show has launched it’s first episode of the new season entitled “Hunted”, a dark thriller about a group of eager young workers looking to climb the corporate ladder, but get sucked into a deadly game for their lives instead.

Four more episodes will follow later this year to round out the season.

“The Dead Hour” is an online indie horror anthology series now in its third season. The show centers around a mysterious and sexy radio DJ who brings her audience dark and twisted stories each week. All webisodes from seasons 1 & 2 of the critically acclaimed series can be seen for free at www.thedeadhour.com.

More news, updates and behind the scenes features can be found on our Facebook page at www.facebook.com/magnumpictures.