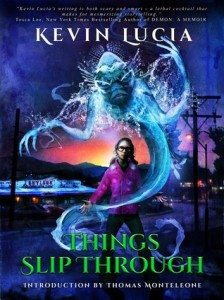 Welcome to Clifton Heights. It may be a nice place to visit, but lingering would be a very, very bad idea.

Things Slip Through is an archetypal trickster of a book. The stories in its pages collectively form a dark ride through a town that, though normal enough on the surface, draws its lifeblood from an ominously beating heart. Framed within a wraparound narrative that brings to mind fond memories of the Amicus anthology films, each self-contained story ties into the others, making this essentially a novel in stories, which works admirably well.

But what are the stories about?

Many of the characters in these stories are on the fringes of society, marginalized or coping with things they can’t quite seem to escape from. In writing about their lives, Lucia touches on racism, alcoholism, and abuse both physical and psychological. He does this with a deft and compassionate hand, which makes it that much more horrifying when characters are faced with the encroachment of unnatural, otherworldly things that they will almost certainly never escape from. That’s not to say that this book isn’t fun, because it is. It’s vividly imagined and moves at a brisk pace, but the sometimes b-movie-esque trappings effectively underscore these deeper issues.

I enjoyed each of the stories, but personal favorites include:

“The Water God of Clarke Street”, a coming of age tale about a disillusioned high school girl and her not-so-innocuous imaginary friend.

“A Brother’s Keeper”, in which an unsuspecting man returns to his homestead to make the ultimate familial sacrifice (with a little help from the friendly family doctor).

“The Sliding”, a wonderfully atmospheric piece that invokes a subtle sense of dread and plays with time in an interesting way.

“Mr. Nobody”, the final story of the book, a touching and harrowing tale of a mother, a missing son, and a creature borne of dark dreams. Given its brief but poignant sketch of love and loss, and coupled with the conclusion of the wraparound story that follows, this is hands down my favorite of the bunch.

The only qualm I have with the book is some stilted, expositional dialogue, particularly in the wraparound piece. Given the strength of the narrative itself and the characters that people it, however, this becomes a non-issue. Lucia is a gifted storyteller. If you’re a fan of the strange and uncanny, and you like the kind of horror that sinks in slowly and hangs around to watch you squirm, you’ll be doing yourself a favor by picking this one up.