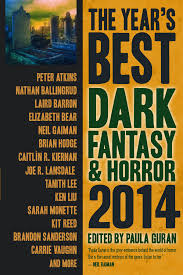 Editors such as Paula Guran, Ellen Datlow and Stephen Jones are to be commended for perusing tons of books and magazines in order to provide the yearly “best” of  dark  short fiction.

One may subscribe or not to their personal choices, but , in any case, the anthologies they deliver render the great service to make us aware of books or authors that we may have overlooked – so much so in a literary genre mostly offered by small, independent publishers little known outside the limited circle of fans and connoisseurs.

Guran’s purpose appears to be wider than that of her colleagues because her annual anthologies aim to cover not only horror but dark fantasy as well. I don’t really care much for the latter (although, admittedly, the line between the two genres is often  very thin), so some of  the thirty-two stories included in the present volume did not work for me just for a matter of taste.

Among the more horrific tales, a few really deserve to be mentioned.

“Blue Amber” by David J Schow is a grim, fascinating tale featuring two cops dealing with weird, alien monsters, while “Cuckoo” by Angela Slatter ( one of my favorite authors) is an extremely disquieting piece about a mysterious creature boldly taking possession of people’ s bodies whenever it deems that necessary.

Lisa Tuttle’s “The Dream Detective” is another standout proving once again the writer’s superb ability as a storyteller. In this particular story dreams and reality interwine in a perfect manner, producing an enticing ,unforgettable piece of fiction.

I guess “Shadows for Silence in the Forests of Hell” by Brandon Sanderson should be considered a dark fantasy tale and, as such, be discarded by yours truly. But I’m not so narrow-minded to be unable to recognize great fiction regardless of genre distinctions.  Enjoy  a spellbinding, very dark tale where an old innkeeper hunts for bounties but is scared by menacing shadows.

Finally a couple of further good( but not great) stories worth mentioning are Sarah Monette’s horrific “To Die for Moonlight” ,revolving around a family curse, and Sarah Singleton’s “Our Lady of Ruins” an offbeat example of ‘religious’ horror.

An anthology not to be missed by the genre(s) lovers.