The World Below: Chronicles of the Goblin King Book One – Book Review 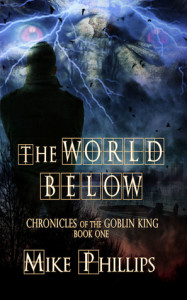 The World Below: Chronicles of the Goblin King Book One

Let me first say that this book is not horror: I don’t believe it was written to frighten the reader. The World Below is more of a dark fantasy-slash-modern fairy tale. While there are horrible things that occur, they aren’t scary.

The opening chapters were a bit heavy on description, which slowed the story for me. Once the story gained momentum though, it was an enjoyable read with fantastical characters and some great one-liners. Phillips also has an amazing imagination: some of his incidental characters are uniquely unusual in their descriptions, actions and rituals, making them that much more memorable.

In keeping with the dark fairy tale, there is a damaged hero and a magical queen. But Phillips is able to bring a fresh perspective to the usual tropes of magic and mystery, while keeping a touch of humor. The heroine is relatable and—dare I say it—cool and the hero is sympathetic in his bewilderment as he is dragged into a world that he never could have conceived of.

I would have liked for the final battle scene to last longer.  I think that with all the effort Phillips took to create the bad guy and all the hero’s trials to locate him, the ending encounter only took a short time to resolve. But as this is Book One, there may be more “big bads” yet to come. Phillips ended Below in the right place, giving a satisfactory ending but leaving enough frayed ends on which to base the rest of his series.

There were also punctuation misuses and other typographical errors that if fixed, would have made this a more polished work.

Even so, it is worthy of a read and a good start to an epic dark fantasy tale.