THE WHO’S WHO of DOCTOR WHO: New Book Coming in January, Countdown Contest Starts Now! 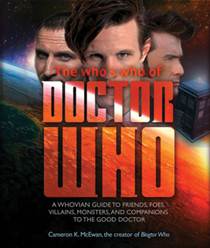 The Who’s Who of Doctor Who is the must-have handbook exploring the dynamic cast of characters in Doctor Who over the past half century. With a heavy focus on the past three doctors, including Matt Smith, author Cameron K. McEwan will explore the tumultuous relationships between characters, their loyalties, and of course, how they collide with each doctor.

Sample chapters like “Unseen Enemies,” “Celebrity Cameos,” “Unnamed Aliens,” “Double Acts,” “Teams,” and “Frenemies” represent just a sampling of all that will be included. Just like his popular blog, Blogtor Who, author McEwan will also include his popular “Top 10” lists citing the best and worst moments all focusing on popular characters over the years. Also includes a Doctor Who Family Tree as well as charts citing monster success rate and other notable character events through the years.  McEwan frequently interviews the Doctor Who actors and attends conventions and press events. He works alongside the BBC, BBC Worldwide, BBC America, Silva Screen, Ebury, and others.

The contest is running now via QGeekbooks, the social media arm of Quayside.  A new trivia question will be posted every day at 12:00 p.m. eastern time until November 23 with winners chosen every day at 4:00 p.m.; complete details are available QGeekbooks’ Twitter, Facebook, Instagram and Pinterest pages.