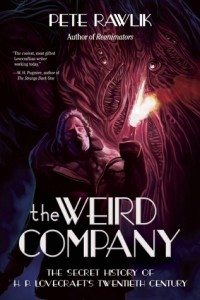 The Weird Company begins in 1937. Dr. Wingate Peaslee is a dissenting voice about a secret military operation. He files a report as the minority opinion. The report is comprised mostly of eyewitness accounts of a series of relevant events, written by Robert Olmstead, the man whose account of a visit to a coastal town in Massachusetts triggered the military intervention in Innsmouth. But now Olmstead, having destroyed Innsmouth only to discover the ramifications of his actions, seeks penance in the company of monsters. To save the world, Olmstead must join forces with a motley band of characters familiar to Lovecraft readers. This Weird company must battle ancient beings inadvertently unleashed by Miskatonic University’s ill-fated Pabodie-Lake expedition to Antarctica upon an unsuspecting world.

Rawlik’s novels are based on the premise that Lovecraft’s stories are not stand-alone tales, but rather, that all of his works took place in a shared universe. This means that although Lovecraft suggests no relationship between “At the Mountains of Madness” and “The Shadow Over Innsmouth” other than Arkham as a geographic reference, Rawlik weaves those events together, with a little “The Thing on the Doorstep” and “Through the Gates of the Silver Key” added for good measure. With the return of Dr. Hartwell, the protagonist from his first book Reanimators, Rawlik created an underlying interconnectivity to all of the events created by Lovecraft. And then, Rawlik branches out; under his skilled pen, John W. Campbell’s “Who Goes There?” suddenly becomes an obvious as a sequel to “At the Mountains of Madness.”

Pete Rawlik’s first novel Reanimators (2013) was the perfect example of how to write a book in a shared universe without descending into pastiche; The Weird Company is a how to expand your vision of that universe, and how to make it your own, without diminishing the source material.

As with the previous book, The Weird Company stands on its own merit as a novel but, the more familiar you are with the work of Lovecraft and his disciples, the more fun this novel becomes to read.