The Way of All Flesh – Book Review 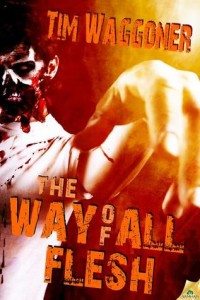 The Way of All Flesh

It is no mystery why Tim Waggoner has received critical acclaim as a writer.  He supplies everything that a horror fan could want, and he delivers with style.  The Way of All Flesh is a zombie apocalypse story that goes beyond the Dawn of the Dead-type scenario and delves into the philosophy behind the carnivorous creatures.

A mysterious event has occurred in the suburb of Lockwood, called Blacktide. Those who succumbed to Blacktide became zombies: the few who were immune live in a continuous struggle to survive–hidden and afraid of succumbing to a zombie attack.

David Croft became a zombie, yet he retains human qualities, such as compassion and love and fairness.  A portion of the story follows him as he tries to make sense of what has happened to him.  During his journey, he finds himself shadowed by an adolescent he calls “Simon.”  Simon is an ambiguous character:  neither the reader nor David knows if Simon is real or a figment of David’s imagination, and Simon refuses to confirm either option.  Simon knows many things, but the one thing he wants to find out is if David is “the One”.

Kate Croft is David’s fraternal twin.  She is a ranger; her job is to scavenge for supplies for Lockwood’s remaining survivors and also to kill any zombie that gets in the way.  One of Waggoner’s interesting twists is to show the rangers through the eyes of zombie David.  To David, the rangers appear demonic or alien.  Waggoner compels readers to question the state of “being a monster”:  if a zombie is capable of having human attributes, and also refuses to dine on the flesh of the living, is he a monster?  Furthermore, are the humans who hunt and destroy these same zombies (sometimes in barbarous ways) monsters?

Other characters help to keep the story’s pace: there is young Marie who obsessively studies zombies and becomes a love interest for Kate, and Nicholas Kemp, a steely serial killer who feels inadequate compared to Blacktide’s death toll and wishes to even the score, starting with Kate and Marie.

The Way of All Flesh does not travel the typical zombie path.  In fact, the story becomes very surreal in an almost Clive Barkerish way (and I mean that as a compliment).  There is an existential underpinning that, pun intended, adds meat to the bones of the story.  Readers are sent on a mysterious quest to find out the origins and reach of Blacktide and if David is in fact “the One” and capable of transcending hunger.  Waggoner provides answers that are as satisfying as they are creepy.  Combined with a crisp writing style, The Way of All Flesh will attract zombie fans in search of a fresh spin on a familiar cultural myth.