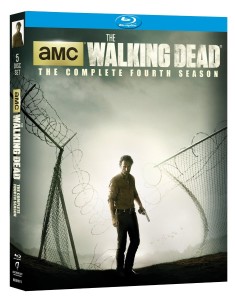 It’s the latest season on disc of the show that launched a 1000 other horror TV shows. I mean really, before American Horror Story, Bates Motel, Salem, Hannibal, Sleepy Hollow, and there’s talk of more to come, like Constantine and even a show based on Friday the 13th. Sure, there were spooky shows on TV before The Walking Dead, but there was never the glorious, gory, glut of serious, violent, and hardcore horror on television like there is now. And I’m not even talking pay TV like HBO or Showtime that can get away with showing whatever they want, all this is on either network TV or basic cable. So am I saying that all this is thanks to The Walking Dead? Yes, yes I am. Love the show or hate it – I hear plenty from both sides of that fight – I think it’s undeniable that if TWD didn’t take a chance and become one of the most watched shows on TV, we would not be in this new golden age of horror-themed television. So thank you, The Walking Dead. That said, does the show still deserve to be one of the most watched shows on television, or is it coasting by on its reputation and very little else now that it’s been running for four years? Well grab your gun, samurai sword, and be sure to aim for the head; we’re heading back to zombie infested Georgia to find out.
The season begins with our heroes still in their homey prison, trying to make better lives for themselves, while avoiding becoming zombie chow. Their community has grown in size considerably, giving them a bit of protection, but day to day life is still full of dangers. When it’s not literally raining zombies during a supply run, there is a virulent sickness running rampant through the camp that is incapacitating, if not outright killing, the majority of the survivors. And just when you thought things could not get any worse, everyone’s favorite psychopath, the Governor, returns.
Speaking of the Governor, he gets a lot of screen time during the first half of this season, and even has an entire episode devoted to fleshing him out. But however good that is, everyone still really wants to see that war he and Rick were constantly talking (and talking and talking) about last season. We’re talking about a full-fledged assault like out of the comic book, and not that sad invasion that ended things in season three. Well this time things do not disappoint. In fact, it ends with one of the best mid-season breaks I can remember of any show.
For the second half of the season, our group of regulars are split up in twos or threes, on the road to nowhere since the safety of their prison is now gone. They run into a group of new survivors that comic fans will recognize, and a group of victimizers looking to plunder this corpse of a world for anything they want. But luckily there is the promise of safety in a place called Haven. I’m sure once everyone meets up there, everything will be good and safe once more…right?
Now for the extra bits on this new Blu-ray set from Anchor Bay. First and foremost, there are a gaggle of ghoulish featurettes to be found here. “Inside the Walking Dead” is a brief look at/synopsis of all 16 episodes from season 4. Likewise, “The Making of The Walking Dead” has some behind the scenes bits of all the episodes. “Drawing Inspiration” is a six minute short about bringing the art from the comic book to life in the TV show. “Hershel” is all about everyone favorite father figure and runs almost eight minutes long. “The Governor is Back”, well it’s all right there in the title, and is nearly nine minutes in length. “Society, Science & Survival” is a five minute short on some of the real life professors and the like that started talking about how you would survive in a post-apocalypse world as a way to get students interested in learning. With “Inside KNB Studios”, we get to take a look at the wizards of gore and special effects that make TWD so memorable, and it runs over 18 minutes.  “A Journey Back to Brutality” is an eight minute look on how our bad of survivors have to get down and dirty to survive in this savage world. What, you want more? Okay, how about audio commentaries on five episodes, three episodes presented here in longer, extended cuts, and a collection of eight deleted scenes from various episodes. Now that’s how you bring a season of television out on disc.
Season 4 of The Walking Dead has the show firing on all cylinders and it very well could be the best season yet. Yes, that’s saying something. A lot happens here, big changes are made, important people die, and things are set up for a kick ass season five. The acting is all top notch, the story rarely, if ever, slows down, and the gory gut-munching has never been better. There’s even a cool nod and wink for the diehard zombie fans out there (cough, cough, Bub, cough). If you are still an avid watcher of TWD, then getting this is a no-brainer. If you have stepped away from the show, this season is sure to win you back if you give it a watch. Consider it highly recommended.