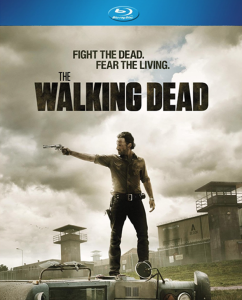 Everyone’s favorite TV show about zombies (hmm, isn’t it the only TV show about zombies?) is about to kick off Season 4. But before that happens, you have the complete Season 3 now on Blu-ray. Is the show still delivering the gut-munching goods, or like the zombies that populate it, is it starting to stink and just shambling along now? Well grab your crossbow and get to a safe place, we’re about to walk with the dead again.

But first, if Season 2 of TWD had any flaws, and it did, it would be some episodes felt like padding. It’s as if the story and events sort of meandered about just for the sake of killing time. When the second half of Season 2 debuted after a short break, things picked up a bit, and it seemed like the show runners had heard and listened to the complaints of the fans. In a similar fashion, Season 3 of this record breaking (as in the number of viewers for a cable TV show) show starts off very strong. No, not every episode doesn’t have to be a zombie killing jamboree, but the plot should always be moving forward, and there’s a whole lot of stuff going on at the start of Season 3. First you have Rick and his group of plucky survivors now as a highly effective force of zombie fighters dealing with oodles of the undead while trying to clear out their new prison home. You have a very pregnant Lori looking fit to pop out her baby at any minute. Young Carl is becoming more distant and even cold blooded as time goes by. There’s plenty of glorious gory gags galore, such as a quick and dirty amputation or a zombie with its face literally falling off. There is also a plethora of new characters introduced this season, just as some of the old group becomes zombie chow. First and foremost is the newcomer, and fan favorite, Michonne, doing her slice and dice thing with her samurai sword. There are a group of convicts discovered at the newly liberated prison that Rick and crew don’t know if they can trust. A couple of characters that haven’t been seen since Season 1 comes back, but I won’t tell you who they are and ruin the surprise here. And then there is the main villain of the season, a man called The Governor. Played wonderfully wickedly by actor David Morrissey, the Governor is the leader of a sizable community of survivors, but he’s a man willing to do anything to anyone to get what he wants. Kill, torture, maim? Sure, no problem for the good ol’ Gov. And that’s not even his creepiest qualities.

All these bits swirl together in a savory stew as the season progresses. They all promise great things to come, and then the second half of Season 3 happens. That is where things…sort…of…slooooooow……dooooooown………. No, not everything completely comes to a standstill as they did in the previous season, but there is an undeniably sense of “lets drag things out for a little bit” to those latter episodes. It almost becomes comical when Rick tells his people that war is coming between them and the Governor’s group and that they have to prepare, and the Governor tell his people the same thing, then Rick tells his people again, and the Governor tells his people again, then Rick really stresses the point, and the Governor has a meeting with his lieutenants to tell them to get ready, and then Rick gives a speech about the upcoming war, and then the Governor…you see where I’m going with this? And to be honest, I thought the actual resolution of that “war” was nothing but a huge copout. A whole lot of buildup with very little pay off, and some nonsense to make sure Rick and his people are unquestionably still the “good guys” in what should be a very grey world.

That said, I did like Season 3, and I still enjoy watching The Walking Dead. It delivers the drama, horror, action, and even comedy goods more often than not, and quite frankly, there’s nothing else on TV like it. I can watch and enjoy something and still notice its flaws. I’ve never been such a fanboy about anything to turn a blind eye to things. It’s only when those flaws outnumber the good points that it is time to stop watching a show. Thankfully, The Walking Dead was still a long way from that in Season 3, and I hope that holds true for many seasons to come.

As for the special features on this new Blu-ray set from Anchor Bay, they’re pretty plentiful when compared to when some other cable TV shows are released on disc. Cough, chough, Dexter, cough. There are audio commentaries with many of the cast and crew for five out of the sixteen episodes this season. Why only five? I have no idea, but the commentaries were well done, both informative and entertaining, so they’re a welcome addition. I just wish there was more of them. What is not in short supply are the interviews/featurettes. There are eight of them here, ranging on focusing on young Carl, to the dynamic between Michonne and the Governor, to the prison as a location, to the lovable zombies and the gore gags that come with them, and so much more. While each featurette is on the short side, all together they equal over an hour of extra content. Last but not least, there are also six extended and deleted scenes collected here just in case you want even more TWD goodness.

The Walking Dead: Season 3 is more of the zombie drama that people just can’t seem to get enough. It has its highs and it has its lows, but thankfully the highs are far more common here. This is a good set of discs with plenty of extras, and if you’re a fan of TWD, or just zombies in general, then these Blu-rays are a must have. Consider it recommended.