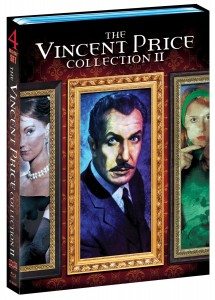 This is a new seven movie box set, so you will notice no director or cast credits here. If you need that, IMDb is your friend. As a horror guy in October, this is Christmas, New Years, Easter, and Thanksgiving all rolled up into one. So yeah, I’m crazy busy until Halloween is over. As a movie guy, most of that insanity has been coming from the awesome Scream Factory as they seem hell bent on becoming THE place for genre Blu-rays and DVDs. Oh who am I kidding, they already are that. No one, but no one, is putting out as many groovy movies as consistently as they are.

And if you’re super busy like I am this time of year, here’s the Twitter version of this review: Get it. I mean come on, it’s Vincent Price in seven classics, doing what he does best. The movies look great in HD and they all come with some awesome extras. In fact, it’s the picture quality (which is very good here) and the extras that really make this set stand out, and if you’re any kind of horrorhead at all, you surely have seen most, if not all, of these films already. Hell, two of them are public domain and usually appear on all the crappy “100 Horror Movies” box sets you see all over for about five bucks or less. So with that said, should you double dip and get this new set for the much improved pretty and the extra goodies? Well let’s find out.

The seven movies collected here run the gambit from silly, to scary, to out and out classics. First there is the Roger Corman directed, very loose Poe adaptation of The Raven, staring Price, Peter Lorre, and Boris Karloff. It’s typical of Corman’s 60s Poe movies. Not so typical is when the trio of (in)famous move ghouls; Price, Lorre, and Karloff, team back up for an out and out comedy called, aptly enough, The Comedy of Terrors. While this may appear to be another Corman vehicle, it’s not. It is based off a screenplay by the late, great Richard Matheson, so that makes me happy. Speaking of Matheson, the first, and still best, cinematic adaptation of his amazing book, I Am Legend, can be found here in the movie; The Last Man on Earth. This is one of those public domain movies I was talking about earlier, but here it looks and sounds much better than it ever has before, and it’s one of the standouts of the collection. Going back to Roger Corman, we have his The Tomb of Ligeia, which is also based off of a Poe story, and is one of Cirman’s favorites od all the  movies he’s done over his legendary career. Last year, when Scream Factory brought out the first volume of the Vincent Price Collection, I was a bit bummed out by the fact that it had the awesome The Abominable Dr. Phibes, but not the sequel. Well, here they fix that grievous oversight, and have Dr. Phibes Rises Again!, which is a weird and crazy film that I’ve always loved to bits. Sticking with memorable sequels, this collection has The Return of the Fly, which has Vincent Price reprising his same role from the original movie. Last. But not least, is the campy Castle (as in William Castle) cult classic, House on Haunted Hill.

All seven of these films are must haves for any Vincent Price fan, and must watches for everyone else. These movies spotlight Price at the top of his game, and while not all of them are horror masterpieces, they’re all wonderful fun, looking and sounding better than ever before. If that’s not enough of a reason to get this new box set, Scream Factory has packed a nice collection of extras into the mix. Three of the films have introductions and final words by Mr. Price, and five of them have audio commentaries by various folks. There are three featurettes on Richard Matheson, who penned three of the movie’s scripts, and three more featurettes on Mr. Price, which only makes sense since his name is in the title.  The usual collection of trailers and still galleries round things out nicely.

So is this new boxset worth the possible double dip? Hell yeah it is. It’s a great set for fans of Mr. Price or just classic horror flicks in general. I enthusiastically and highly recommend Scream Factory’s The Vincent Price Collection II, and can’t wait to see if a third volume will come out next year.