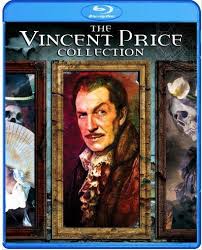 OK, this is a six movie box set. As such, you will notice no director or cast credits here. Seriously, if you need that, IMDb is your friend. Come on, it’s October. For a horror reviewer like me this is Christmas, New Years, Easter, and Thanksgiving all rolled up into one. So yeah, I’m crazy busy until Halloween is over. As a movie guy, most of that insanity has been coming from the awesome Scream/Shout! Factory as they seem hell bent on becoming THE place for genre Blu-rays and DVDs. Oh who am I kidding, they already are that. No one, but no one, is putting out as many groovy movies as consistently as they are. And big surprise, this nice six pick of Price is also by them. Oh and because this is a six pack, my usual nickel tour of the plot will be pared back to my two cents on things, lest we be here all day.

But hey, if you’re super busy like I am this time of year, here’s the Twitter version of this review: Get it. I mean come on, it’s Vincent M-F’ing Price in six classics, doing what he does best. The movies look great in HD and they all come with some awesome extras. In fact, it’s the picture quality (which is very good here) and the extras that really make this set stand out, and if you’re any kind of horrorhead at all, you surely have seen most, if not all, of these films already. Hell, you probably own a few of them. If so, should you double dip and get this new set for the much improved pretty and the extra goodies? Well let’s find out.

The six movies collected here are two of Corman’s Poe classics, The Pit and the Pendulum and The Masque of the Red Death. Any, and I do mean ANY, horror fan must already know either what these movies, or the stories that inspired them, are about. (Pst, if you don’t, then go read the Poe stores. You don’t want to be laughed at by all the other horror fans do you? And don’t worry, your secret is safe with me) Next is The Haunted Palace that despite being billed as a Poe story IT IS NOT! It’s actually based on H.P. Lovecraft’s excellent tale, “The Case of Charles Dexter Ward.” For marketing reasons, because Poe was a more well-known name at the time to the general masses (read as: not real horror fans) than Lovecraft, this movie was sold as a Poe picture. Yeah, that’s just B.S. but what are you going to do? Anyway, it’s back to another proper Poe picture directed by Corman with The Fall of the House of Usher. Next is the very weird and awesome, The Abominable Dr. Phibes, and if this box set does have any flaw, it’s not including the equally bizarre sequel Dr. Phibes Rises Again. That misstep aside, this collection does end well with Witchfinder General.

All six of these films are wonderful are must haves for any Vincent Price fan, and must watches for everyone else. These movies spotlight Price at his wicked best, and while there are some personal Price favorites of mine that I would have loved to see added to this set, this is a good general overview of Vincent Price’s work, if a bit heavy on the Corman/Poe pictures. That’s not necessarily a bad thing, as I like those films, and if you’re a fan of Price’s Poe work, then this collection will make you extra happy.

On to the extras, and there are a lot to get through here. First, there is a cool 23 page, full color collector’s booklet included with the Blu-rays, and I always love extra goodies like that. Each movie (except for one) comes with a short introduction and some behind the scenes bits by Mr. Price himself and concludes with some final words by the same actor after the film. These were recorded for TV back in 1982 and it’s good to see the old master talking about his movies in his own words. As for the special features for each individual movie…

Pit and the Pendulum comes with an audio commentary with producer, director, and legendary lord of the B-movies, Roger Corman. There is also a “rare prologue” that runs 5 minutes, a theatrical trailer, and a photo gallery.

Masque of the Red Death has an audio commentary with Steve Haberman. There’s a nearly 20 minute interview with Roger Corman. A theatrical trailer and photo gallery rounds out the extras for this film.

The Haunted Palace has two commentaries. One by Lucy Chase Williams and Richard Heft and the other by Tom Weaver. There is an 11 minute interview with writer/director Roger Corman where he freely admits that this movie, while thoroughly based on H.P. Lovecraft’s story, was forced to be labeled as a Poe picture for marketing reasons. There is also a trailer and a photo gallery found here.

The Fall of the House of Usher also has two commentaries. One is with Roger Corman and the other is a retrospective commentary with Vincent Price himself that I really liked. There is also an audio interview with Mr. Price that runs a hefty 41 minutes. The now omnipresent trailer and photo gallery are on here as well.

The Abominable Dr. Phibes continues the two commentary track trend with one by Robert Fuest and the other by Justin Humphreys. Despite this movie getting its own Blu-ray, it only has a very few extras on it. There is a 13 minute featurette on the “Vincent Price Gothic Horrors” TV show form the 1980s. That’s the show where all of the intros and outros Mr. Price does for all the movies on this collection came from. Well that is, all the movies but this one! Yeah, The Abominable Dr. Phibes get no intro or final thoughts and because I’ve always really liked this very weird film, I do think that’s a shame. Other than the brief featurette, there’s a trailer, a still gallery, and that’s it. As fun as this film is, the lack of featurettes about it here is a shame.

Witchfinder General is back to the single commentary track with one by Philip Waddilove and Ian Ogilvy, however, it more than makes up for that with a bunch of extras. There is a 25 minute featurette on this film called “Witchfinder General: Horror Classic.” There is an interview with Vincent Price that runs over an hour long. A second interview with daughter Victoria Price is also on here, and that one is over 47 minutes long. There are alternate opening and closing title sequence for the movie under its other title, The Conqueror Worm. Trailers, a still gallery, and some random additional Vincent Price trailers (because why not?) bring this impressive list of extras for all these impressive films to a close.

This is a great box set for fans of Mr. Price or just classic horror in general. All the movies look great in HD and they come packed with plenty of nice extras. Therefore I can enthusiastically and highly recommend Scream Factory’s The Vincent Price Collection.