The Undertakers Coming to the Big Screen 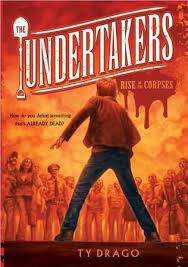 Producer/Director Andrew van den Houten of Modernciné announced today that his company has tapped “Final Destination” creator Jeffrey Reddick to adapt “The Undertakers,” the first in a series of young-adult books by Ty Drago.

The books, described as “Spy Kids” crossed with “The Walking Dead” centers on Will Ritter, a High School student who begins to see that some of the people around him are “Deaders,” inter-dimensional entities that take over the bodies of the dead and use them as hosts. When Will is recruited by a group of kids who are also gifted with “The Sight,” he discovers that he holds the secret to stopping this new type of terrifying invasion.

Jeffrey Reddick, whose “Final Destination” franchise has made over a half a billion dollars worldwide said: “I’ve been trying to find a project to do with Andrew for years and when I read Ty’s book I knew this was the one. It’s a unique concept with compelling characters and a fun mixture of adventure, cool sci-fi and intense horror.”

Modernciné, which has made a name for itself by producing dark and edgy material, including Jack Ketchum’s “The Girl Next Door” and “The Woman,” definitely sees “The Undertakers” as the start of a new teen franchise.

“With Lucky McKee and Chris Sivertson’s “All Cheerleaders Die” in post-production, “The Undertakers” is yet another potential franchise that moves our brand toward larger audiences. Mr. Reddick is the ultimate fanboy of these types of films and his success is proven. His vision for adapting Ty Drago’s awesomely original book series is exactly what we want to bring to the big screen. “The Undertakers” gives us chance to share the horror genre with the younger underserved fans as well,” said Modernciné’s van den Houten.

“Jeffrey Riddick has done more than simply capture the spirit of “The Undertakers.” He’s brought them to life, with all the action and horror and humanity that goes along with that. His screenplay honored me almost as much as it blew me away!” said author Drago.