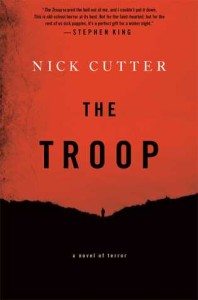 The Troop is the debut novel of the pseudonymous Nick Cutter, an author whose real identity is a fairly open secret (there’s an author picture in the back of the book, after all). The story follows a Scout troop on their annual camping weekend, on a small island in Eastern Canada. It’s supposed to be educational and character-building, the five boys and their Scout leader leaving modern technology on the mainland and braving the elements for a couple of days. Everything changes in an instant when a stranger arrives on the island, a man who is very sick…

Mira Grant says The Troop is “Lord of the Flies meets Night of the Creeps”, which is as good a comparison as any. The illness plaguing the stranger involves grotesque worms of considerable size. Given the size of the isolated island (which the boys soon find themselves stranded on), it’s not hard to draw conclusions about what happens next.

Everything you might expect is here (breakdown of social hierarchy, shifting alliances and betrayal, drastic personality changes wrought by mortal fear). Each of the characters is distinct, and it’s fascinating to see their progression as things get worse.

There’s never a shortage of conflict. Whether it comes from nature, illness, or the boys facing off against each other, something is almost always there to propel the story forward. Interspersed throughout the main narrative are newspaper articles, journal entries and other things detailing the mainland’s view of events, a technique that Cutter admits to borrowing from Stephen King’s Carrie. It does break the story’s flow in a couple of instances, but generally works well as a means to give more detailed information about the origin of the worms than the boys are privy to.

As interesting as the interplay between the characters is, The Troop is a  gross-out novel first and foremost. It’s nauseating, it’s stomach-churning, and it’s completely unapologetic about it. Cutter makes every attempt to describe in slithering, stinking detail the deterioration of the human body. The meticulous attention paid to description extends to nature, weather, and many other things. This exhaustive adherence to detail could be seen as unnecessary and too drawn out, but it fits the novel. It’s a book you can just escape into and relish (or be repulsed by) the sensation. It’s a very physical brand of horror, and won’t appeal to everyone, but it’s well worth a read. Fans of this kind of thing will eat it up. Just don’t eat while you’re reading it.