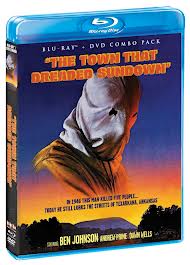 The Town that Dreaded Sundown

This movie is a hard one to classify. It is part real life crime drama, part pseudo-documentary, part slasher film, and even part silly comedy (especially in regards to a wacky cop named “Sparkplug.”) It is based off a real life murderer known as The Phantom Killer who terrorized the Town of Texarkana in 1946. This murderous maniac was never captured and the case remains unsolved to this day. The movie was directed by Charles B. Pierce whose first feature film, The Legend of Boggy Creek, became a bona fide Bigfoot cult classic. This film shares that other movie’s docudrama feel and even narration. And as for the slasher aspect, it’s got a hulking, heavy-breathing psycho in it wearing an old potato sack mask, killing people as they make whoopee (that’s what they called it back in 1946, right?) in a wooded setting. Now if that sounds like the plot to a Friday the 13th flick, well you’re not alone in thinking that. In fact, most horror fans, if they know about this movie at all, usually refer to it as, “you know, that movie where they stole the look for Jason in Friday the 13th part 2 from?”  Oh and it also has POV shots from the killer’s perspective, so for those horrorheads out there that think Halloween started all that; wrong.

This film has a cool looking killer, can use the “based on a true story” tagline for real (even if it does take large liberties with the facts), and has a bit of a historical cred to it, but is it really worth a watch? Well grab your favorite sack mask and your deadly trombone (no, really) and let’s brave the sundown everyone was dreading.

Town is a period piece in both its setting and how it’s made. The old chestnut of “they don’t make ‘em like that anymore” easily applies to this movie. It feels like a predecessor to all those serial killer movies shown on the Lifetime or TurTV channels. While it was made for the big screen, it now has a sort of made for TV feel to it. It is a thoroughly PG rated movie, which means no real gore, nudity, or profanity to speak of, but that is not to say that it doesn’t have its share of frightening or suspenseful moments. One that comes to mind is when a wounded Dawn Wells (Mary Ann of Gilligan’s Island fame) is being menaced by a masked killer with a pickaxe. If that don’t scream slasher flick then you don’t know slasher flicks.

However, this is a wildly uneven film in tone. I mentioned the silliness briefly, but I feel the need to elaborate on it because if this movie had a misstep, it was that. I understand comedy being used in a fright flick to break up the oppressive tone from time to time, but this movie almost goes into Last House on the Left territory with its atmosphere-shattering bits. A couple is attacked where the man is brutally beaten and the woman lashed to a tree and tortured, and that is followed by some nutty cross-dressing shenanigans by the cops. Another couple is attacked in their home with the wounded wife slowly crawling away for her life, and then there is some silliness about a cat in a garbage can complete with a wha wha whaaaa musical sting. After a while all those “ha-ha, gosh” moments just started getting to me.

The new Blu-ray from the awesome Scream Factory (seriously, no one is doing horror movies like that these days) has a great looking, bright and colorful image. I haven’t seen this movie for years and then it was an old VHS tape (as it has never been released on DVD), and this copy is miles beyond that in picture quality. Now there are the occasional scratches and grainy spots here, but overall this movie looks wonderful for being a nearly forgotten film almost as old as I am. Now that’s old!

As for extras, chief among them is a whole other full-length feature film for free on DVD. The movie is The Evictors from 1979 that was also directed by Charles B. Pierce. Now I didn’t watch that film, so I have no idea what it’s about, but hell, it’s free! So if you don’t like it, well you haven’t paid anything for it. As for the extras pertaining to Sundown, there is an audio commentary with Justin Beahm (I have no idea who he is, he never says his relationship to the movie) and historian and Texarkana local, Jim Presley who discusses the facts behind the real world unsolved murders this movie was based on. There is an almost 10 minute interview with actor Andrew Prine who played Deputy Ramsey in the movie. There is a short, 5 minute interview with Dawn “Mary Ann” Wells. The third interview on this Blu-ray is with director of photography James Roberson about the look of the movie that runs just over 12 minutes. There is an interactive essay on the real life Phantom killer. Lastly there is the theatrical trailer, poster and still galleries to round out the extras here.

I really dug watching The Town that Dreaded Sundown again after all these years. It was a blast from the past for me. If you have never seen this film before, don’t go into it really expecting a horror movie, as there are too many other conventions here, not to mention some misplaced comedy, that keeps from fully feeling like a fright film. It does have some good tension and suspense, a truly menacing killer with a great look, and some decent acting and direction. For all that I can easily give it a recommendation.