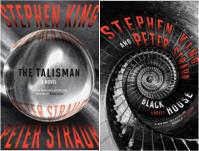 This fall, Scribner will be publishing stunning new hardcover editions of The Talisman and Black House by Stephen King and Peter Straub, and due to popular demand Cemetery Dance will be creating a special slipcase to house both books in stylish fashion for collectors. As a special bonus, they’ll also include an incredible full-size poster featuring an original color piece of artwork by Tomislav Tikulin created just for this set! It’ll be inspired by The Talisman or Black House.

Cemetery Dance will only produce enough slipcases and posters to fill preorders for the two book set, so there might only be a couple dozen or a few hundred (at the very most) of these collectible book sets anywhere in the world. Place your order early so you don’t miss out.

Included in this Collectible Set will be:

About The Talisman: On a brisk autumn day, a thirteen-year-old boy stands on the shores of the gray Atlantic, near a silent amusement park and a fading ocean resort called the Alhambra. The past has driven Jack Sawyer here: his father is gone, his mother is dying, and the world no longer makes sense. But for Jack everything is about to change. For he has been chosen to make a journey back across America–and into another realm.

One of the most influential and heralded works of fantasy ever written, The Talisman is an extraordinary novel of loyalty, awakening, terror, and mystery. Jack Sawyer, on a desperate quest to save his mother’s life, must search for a prize across an epic landscape of innocents and monsters, of incredible dangers and even more incredible truths. The prize is essential, but the journey means even more. Let the quest begin…

About Black House: Twenty years ago, a boy named Jack Sawyer traveled to a parallel universe called the Territories to save his mother and her Territories “twinner” from a premature and agonizing death that would have brought cataclysm to the other world. Now Jack is a retired Los Angeles homicide detective living in the nearly nonexistant hamlet of Tamarick, Wisconsin. He has no recollection of his adventures in the Territories and was compelled to leave the police force when an odd, happenstance event threatened to awaken those memories.

When a series of gruesome murders occur in western Wisconsin that are reminiscent of those committed several decades earlier by a real-life madman named Albert Fish, the killer is dubbed “The Fisherman” and Jack’s buddy, the local chief of police, begs Jack to help his inexperienced force find him. But is this merely the work of a disturbed individual, or has a mysterious and malign force been unleashed in this quiet town? What causes Jack’s inexplicable waking dreams, if that is what they are, of robins’ eggs and red feathers? It’s almost as if someone is trying to tell him something.

As that message becomes increasingly impossible to ignore, Jack is drawn back to the Territories and to his own hidden past, where he must find the soul-strength to enter a terrifying house at the end of a deserted track of forest, there to encounter the obscene and ferocious evils sheltered within it.

Check it out on Cemetery Dance: The Talisman / Black House