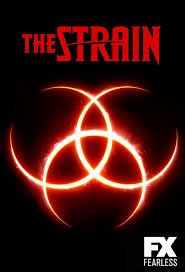 The Strain, created by del Toro and Hagan, is a high-concept vampire show that re-imagines our ancient blood-sucking enemy as carriers of a strange parasitic infection, backed by big money and power. It begins with an international flight from Berlin landing at JFK airport and going dark. Discovering that all but four of the passengers and crew are dead, the head of the CDC’s New York Canary Office, Ephraim Goodweather (Corey Stoll) rushes to contain the unknown epidemic while octogenarian holocaust survivor and vampire hunter Abraham Setrakian (David Bradley) readies himself to face his old foe.

The Strain promises an interesting re-envisioning of vampires as truly diabolical and horrifying creatures, and fans of del Toro can expect his signature visual flair. These vampires blend supernatural horror with modern medical thriller, and old legends with new technologies. The first episode, Night Zero, has a lot of work to do in order to introduce numerous characters, provide extensive backstory, and get the plot moving. There is an unfortunate amount of fairly stilted expository dialogue in service of this burden. The scenes introducing Goodweather and Setrakian are the worst offenders, with Goodweather’s abortive marriage counseling session painful to sit through, and Setrakian’s “surprise, I’m a super bad-ass” scene laying it on too thick. Twists and violent actions come at a rapid rate in an effort to create a sense of urgency and hook the audience, but the twists are too often easily anticipated.

The Strain has the potential to offer satisfying thrills for the horror fan. I am hopeful that the dialogue and characterization will improve once we’ve become oriented to the landscape and, after one episode, the show’s creative team has provided bloody shocks, psychological horror, and a willingness to kill characters at a brisk pace. My primary concern going forward is that the vampire disease seems so easily transmissible, and the lead vampire so powerful (both individually and in terms of financial and political reach), that it raises the question of why they haven’t bothered to try and destroy the world sooner. There could be good reasons for this, but if they aren’t explained soon, it will be a gaping hole in the logic of the world.

At minimum, The Strain should offer a fast-paced supernatural thriller and should be a welcome addition to television’s horror Renaissance.