The Smell of Evil – Book Review 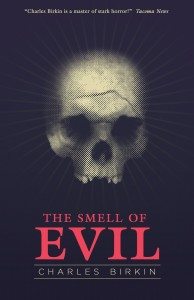 The Smell of Evil

Dennis Wheatley is quoted on the back cover as stating “More than a definite touch of the great master, Edgar Allan Poe.”  Well intentioned though that comparison may have been, it is totally misleading. Birkin’s style is as far from Poe’s as it could possibly be. You’ll rarely find anything approaching the Gothic horrors of Poe within the dark tales of human evil in Birkin’s stories. Invariably set within the contemporary world, the characters in these thirteen tales are firmly based on reality.  Whether they be self-deceived German gardeners working within the shadow of Second World War concentration camps or young tearaways escaping from a race riot in 1960s London, the horrors within these stories are of man’s (or woman’s) own making.

With an elegant writing style, Birkin shows his complete mastery of the conte cruel, leading the reader on to some of the most sadistic climaxes in literature. He rarely uses the supernatural, though when he does, as in “Little Boy Blue”, he is as proficient in this as in his more usual kind of story.

Born in 1907, Charles Birkin (later Sir Charles Birkin) had a long literary career, editing the Creeps series for Philip Allan in the 1930s, as well as an inaugural collection of his own stories, Devil’s Spawn (1936), before laying his writing to one side during the Second World War when he served in the Sherwood Foresters. Many of his most infamous stories stem from his experiences during and just after the end of the war when he witnessed first hand what men were really capable of doing. It was not till the 1960s, though, that he began writing again with the encouragement of his friend, Wheatley. The Smell of Evil was the first of seven collections published during that decade, culminating in Spawn of Satan in 1970. After living in Cyprus for several years he died on the Isle of Man in 1985.

Long out of print, other than several hard cover, now collectible volumes from Midnight House, it is wonderful  to see Valancourt Books at last bringing an easily affordable collection to a new reading public. It would be even more wonderful if over the next few years if the rest of Birkin’s collections are brought back into print.

This volume is rounded out with an insightful introduction by John Llewellyn Probert.