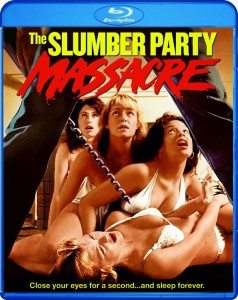 A few years back, Shout! Factory was doing their Roger Corman’s Cult Classics line of DVDs and BDs. Those ran the gambit from cheesy monster movies, sci-fi farces, and masterpieces of the weird. Eventually they did THE SLUMBER PARTY MASSACRE COLLECTION, a two-disc DVD set containing all three of the MASSACRE movies. This was before their amazing horror division, called Scream Factory, came about. Now they have released the first, and by far the best, SLUMBER PARTY MASSACRE movie solo onto Blu-ray for the first time. Is this movie worth a get? Is it worth an upgrade if you already have the three movie DVD set? Well get your drill, and don’t answer the door even if it’s the pizza guy, and let’s find out.

1982’s SLUMBER PARTY MASSACRE is a bona fide slasher classer. It’s bloody, silly, sexy, and fun. It’s everything a good 80s slasher should be. Even if you’ve never seen it, you know about it. It’s the one with the infamous “Driller Killer” in it. He’s the greasy psycho who chases around a bunch of scantily clad, or outright nude, high school girls having a sleepover. His weapon of choice is huge electric drill, and this long, deadly tool is usually held at crotch level, just in case the symbolism of girls getting drilled was too subtle for you.

Where many horror movies made during this golden age of slasher flicks were cheap cash-ins with little to no talent in them at all, this admittedly silly slice of cinema has quite some skill behind it. The acting is nothing stellar, but it is more than competent, as is the direction, no matter what the high-minded film critics at the time said in their reviews. It has more than a few moments of effective shocks and suspense as well as some nice bloody moments, but by far the biggest star of the show is its wicked sense of humor. While not really a parody or spoof, this SLUMBER PARTY is well aware of the slasher tropes, even back in 1982, and it plays with those. It also has some out and out funny moments. Oh and for fans of cute naked ladies, yeah, it has a lot of that too. So really, it’s a win, win, win all the way around.

This new Blu-ray from Scream Factory has some nice extras on it, but most of them are direct ports from the previous DVD three-pack. There is an audio commentary with director Amy Holden Jones and actors Michael Villella and Debra De Liso. There is a 23 minute featurette called “Sleepless Nights: The Making of The Slumber Party Massacre.” There are trailers for all three SLUMBER PARTY movies, and a still gallery. There is one new special feature on here, and that’s a 13 minute interview with actor Rigg Kennedy. However, easily the best new feature of this release is the HD transfer. While there is still some grain on the screen, this movie does look sharp and bright.

THE SLUMBER PARTY MASSACRE is pure silly slasher gold with lots of T & A, gory kills, and a fun sense of humor. No, it’s not a great film, but it sure is an enjoyable flick. If you already have this on DVD, then I can only recommend it if you’re an avid videophile. Other than looking really good here, there’s not enough new on this disc for me to recommend a double dip. However, if you’ve never seen it, and classic 80s horror moves are your thing, then you really need to check it out. So consider it highly recommended if you don’t already have it in your collection, and moderately recommended to Blu-ray snobs (you know who you are) if you do own the DVD. If you fall into either one of these camps, you can get this Blu-ray on March 18th.