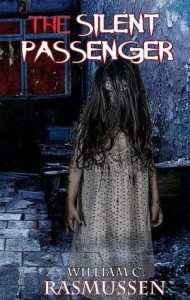 The Silent Passenger is actually a collection of two thematically similar novelettes.

The first (The Silent Passenger), tells the story of Frank Marsh, a trucker who spends  much of his time on the road and away from his wife, Liz. While returning home from one of his routes, he stops to check out the remains of a school in which eighteen children and their teacher died in a fire some months before. As he gets back in his truck, something comes along for the ride.

From here things escalate fairly quickly, given the brevity of a novelette, but not as quickly as they should. Many words, phrases, even character’s actions are repeated throughout the first half of the story. I also winced at the unnatural-sounding dialogue and some stiff and formal descriptive passages. Thankfully I was invested enough in the general conceit that I was curious to see where Rasmussen was going with this, because it turned out to be a fairly decent little piece.

The characters here aren’t haunted by ghosts so much as they’re haunted by the past. It’s essentially a story of the disconnection between Frank and Liz, brought about by several unresolved issues. The real horror here is just how disconnected things become. The supernatural aspect, while central to the plot, is unexpectedly downplayed. I found the story to be almost touching at times, but the execution just wasn’t on the same level as the ideas being presented.

The second story, Rift, is a brief and strange little tale that sees the supernatural take the wheel. I don’t want to give much away, so I’ll just say there’s a swimming pool and some missing people. It’s well-placed after The Silent Passenger in that it also deals with a marriage thrust into a very strange sort of conflict. The ending is satisfying as well, something it shares with the previous story.

Despite the stylistic gripes I mentioned, I did enjoy The Silent Passenger well enough. The stories here aren’t the most original by any stretch, but there’s an earnestness and charm about them that I appreciated. Of course there are books of this style that I’d recommend before this one, but if you’re the kind of horror fan who’s read everything, you could do worse. The price is fair and, if you get the paperback version, the presentation quite impressive. The cover art by Tom Moran is aesthetically-pleasing (in a grotesque sort of way) and extends from the front to the back of the book. There’s also a little illustration of a truck framing the title at the top of each page, which I thought was a nice touch.

This is not a book that’s going to blow you away. If you’re into the psychological side of the genre, though, and you can overlook its faults, it’s a fine read to spend an hour or two with.