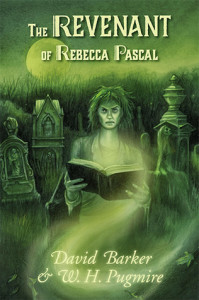 The Revenant of Rebecca Pascal

The plot—as with so many of Lovecraft’s stories—is simple. Richard Pascal has taken possession of an Arkham mansion once occupied by his eccentric poet/actress aunt, Rebecca. He is satisfied to sit around in a rather desultory retirement, reading in her huge collection of books and visiting local hangouts, especially the Desolate Café. Students from Miskatonic University—and occasionally members of a notorious witch cult—gather there to read their poetry, and one evening, Richard hears some startling verses from an apparently homeless woman, Julia Spenser.

After a series of outré events, including nighttime visits to Hangman’s Hill, frighteningly prophetic dreams, and encounters with a would-be book buyer obsessed with locating Rebecca’s rumored cache of occult books, Richard discovers a secret book filled with ancient tomes and, as he tries to make sense of them, opens the way for the spirit of his dead aunt to possess Julia Spenser. The revenant Rebecca takes up residence in the old mansion and, in true Lovecraftian style, begins maneuvering for the return of a long-exiled elder god, in this case Kamog.

What makes The Revenant enjoyable is the sheer energy the authors bring to re-creating the rhythms and cadences of Lovecraft’s quasi-eighteenth-century prose, complete with long, complex sentences and abstruse vocabulary which, upon consideration and sometimes investigation, turn out to be exactly right. They gather an estimable congregation of favorite old families—especially the Waites and the Derbys, with a cameo by a painting from Richard Upton Pickman—then allow them to penetrate further and further into cosmic darkness until they all arrive at an apocalyptic conclusion.

A fairly quick read at 130 pages, and accented with ghostly, haunting color illustrations by Erin Wells, The Revenant is worth a visit…just don’t try to stay there very long.