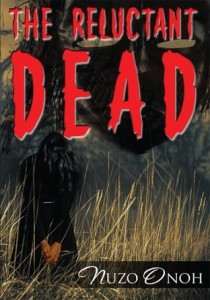 In The Reluctant Dead, author Nuzo Onoh’s first foray into the wonderful world of horror, the British scribe gives us six compelling ghost stories deeply rooted in her heritage and told from a part of the world that’s been somewhat M.I.A. in the horror genre – Africa.

Regardless of where you call home on this giant ball of rock and gas, the spectral stories presented here are ones you’ve most likely heard before, especially if you tend to think of yourself as an aficionado of all things spooky and weird. These are the supernatural tales of innocence lost, of unfinished business and vengeful spirits, of curses, witch-doctors and reincarnation. But what makes the same old oh-no-I’ve-been-murdered-and-now-must-seek-vengeance-from-beyond-the-grave concept fresh within the pages of The Reluctant Dead is the dark side of African culture that slinks its way out of the shadows to ghoulishly unfold in each vignette, adding sentiments of terror that simply wouldn’t work if the stories were being told by, say, farmer Joe from the flat-lands of Saskatchewan.

Take Onoh’s first short story in the collection, The Follower, a tale about (and stop me if you’ve heard this one before) a vengeful spirit with unfinished business.

But that’s just the bare bones of the fable, there’s much more to it than what initially meets the eye – the spirit in question becomes latched onto a morgue worker who refuses to follows the rules set in place in the morgue; rules not only to respect the dead, but to protect the worker himself. However, the result of his insolence enables the spirit to use the worker to its advantage and gain that oh-so-sweet taste of vengeance and wrap up the unfinished business keeping it tethered to our plain of existence.

The story itself is rich with traditional African beliefs and laced with more superstitions than the Stevie Wonder song, and that’s exactly what the African horror genre is all about – a cultural infusion of traditional religious beliefs and superstitions blended with ancestor worship, all set against the beautiful backdrop of a continent most mysterious to those who’ve yet to explore it.

The remaining five stories (A Good Student, Hadiza, The Returned, Night-Flyer and The Names of our Dead) touch upon the aforementioned subjects of curses, witch-doctors, reincarnation and, yes, more spirits seeking either vengeance or to finish their business or all of the above. These stories are also successful in taking some familiar concepts and using the cultural spin to not only generate feelings of unease, but also to pique one’s curiosity as to how it all plays out.

One thing about stories from far and distant lands (assuming Africa is both far and distant from where you’re currently reading this) is the lost-in-translation factor, a.k.a. words in a language that is not your mother tongue. Onoh was kind enough to include in-story definitions of some of the terms used throughout the collection, but does skimp on a few and Google, apparently, has its limits. But that’s perfectly okay – the stories are easy to follow and with a little bit of common sense, you should be able to figure out that Amibo isn’t exactly a compliment or that Amadioha is the Igbo people’s God of thunder and lightning (okay, Google helped with that one).

What’s presented within the pages of The Reluctant Dead is an enjoyable, culturally candid and spooky little romp through the guts of African horror. It’s a great introduction into the belief- and superstition-based genre, and hopefully, with some time and patience, we’ll be seeing a lot more tales of the weird and strange straight out of Africa.