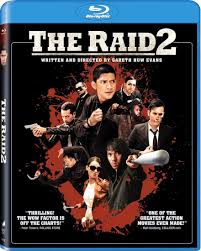 Yes, this isn’t horror, but it is completely, totally, grade-a badassery at its finest. It’s also got loads more blood and violence than most horror movies. It’s also (also) an all-out action movie the likes of which that are sadly in short supply these days. At least, in they seem to be in this country, where action movies have been co-opted by guys in capes and spandex. In short, it’s a movie not to be missed just because it doesn’t have vampire fangs, chainsaws, or ghosts in it. So that’s a bit of me tipping my hand right at the start, but this movie is worth it. But before I give too much away, let’s begin at the beginning.

And speaking of beginning, this sequel starts just moments after the first film ended, so it might be a good ideas to watch The Raid: Redemption before going into this one. No, it’s not 100% necessary, but hell, that movie was pure awesome as well, so why not watch it if you haven’t?

Anyway, the one surviving cop from the first flick, Rama, learns that everything he had just gone through was for nothing. The infection of crooked cops in Indonesia – *sound of record scratching* – oh did I forget to tell you that it’s a foreign film? Yeah it is. Deal with it. Subtitles are not your enemy, and this film is so worth some extra reading. Anyway, the Indonesian police are deep in the pockets of the local crime syndicates, so if Rama wants to take them down, he’s going to have to go deep undercover. To help him make that tough decision, a new player in the Indonesian underworld kills his brother. After that, he voluntary goes to jail for two years to get close to the son of the head of the Indonesian mafia. Two years, and a whole lot of jailhouse butt whuppin’, later and once Rama is out of the joint, he joins his “friend’s” crime family right in time to get wrapped up in a big turf war between the Indonesians, the Japanese, and a mysterious third party run by the gangster that killed his brother.

Where the story goes from there is a standard, but satisfying, bit of police drama on par with some of the better cop flicks being made these days. What’s not standard are all the amazing fight scenes and that’s where this movie excels above all others. Not only are the fights action packed, but they are violet and feel visceral. There are no one-kick-to-the-face-and-the-disposable-thug-is-knocked-out stuff in most martial arts flicks. No, everyone here goes down hard. This move makes you feel ever hit, every broken bone, and every cut. Just as a good kill is so important to a slasher film, a good fight is the meat on the bones of an action flick, and this meat is so very tasty, even if it’s bloody and raw. Honestly, if you are a true fan of fighting films, this movie will make you smile while simultaneously wincing.

But brutal, white-knuckle battles and a decent story is only two parts of this fine film. The acting is also top notch by all involved and the direction by Gareth Evans is even better than that. In a very short time, I have become a fan of Mr. Evans’ work, and this movie shows that his already impressive skills continue to improve. He knows action, and he knows how to film it. There’s none of that far too close up crap here, that so many other “action” (yes, those are finger quotes) movies use to cover up the fact that they don’t know how to shoot action scenes well. Here, you can see everything, and that makes you appreciate the amazing fight choreography all the more.

The new Blu-ray from Sony and Stage6 comes with some nice extras befitting a movie this good. That’s despite it being a foreign film, which usually gets the shaft in the extras department when they come to North America, so good on Sony for going the extra mile on this one. There is an audio commentary track with director, Gareth Evans. There is a deleted gang war scene for those that wanted more action and carnage from this movie. There is a short (10 minutes) behind the scenes featurette called “The Next Chapter: Shooting a Sequel” and another called “Ready for a Fight: On Location” that’s 13 minutes long that’s about the awesome bathroom fight from the start of this movie. Want more? Well there another one all about the fighting called “Violent Ballet: Behind the Choreography” that’s 19 minutes long. There’s a Q&A session at a premier for the film with the director, composer, and star that runs 44 minutes, and then a theatrical trailer.

This is a martial arts action film for fans of those films. If that’s you, then run, don’t walk, to your local store (or just hit the internet) and get this movie when it comes out on July 8th. It is beyond highly recommended.