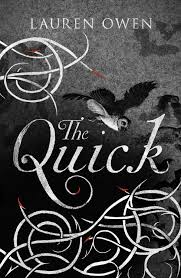 “London, 1892. James Norbury, a shy would-be poet newly down from Oxford, finds lodging with a charming young aristocrat. Through this new friendship, he is introduced to the drawing rooms of high society and finds love in an unexpected quarter. Then, suddenly, he vanishes without a trace. Unnerved, his sister, Charlotte, sets out from their crumbling country estate determined to find him. In the sinister, labyrinthine city that greets her, she uncovers a secret world at the margins, populated by unforgettable characters, including a female rope walker turned vigilante, a street urchin with a deadly secret, and the chilling “Doctor Knife”. But the answer to her brother’s disappearance ultimately lies within the doors of one of the country’s preeminent and mysterious institutions: The Aegolius Club, whose members include the most ambitious, and most dangerous, men in England.”

So what’s the big secret? Fans of horror that pick up The Quick and read the first 100 pages may be questioning their life choices as the story goes from childhood plights to fancy dinner parties to a sudden romance, but flip to page 101 and the novel steps out from the shadows and bares its true self, blood-stained fangs and all. Yes, ladies and gentlemen, The Quick is about vampires.

What starts as the one-sided story of James shifts gears to multiple intertwining stories that author Lauren Owen elegantly weaves together in her debut novel. There’s never a moment of confusion, never a moment of momentum lost as the reader gets inside the heads of James, his sister Charlotte, and a medley of other players, both working for good and evil. Owen gives the more important characters the room they need to grow, dedicating chapters to their origins, all while keeping the flow of the main story line fluid and steady.

Following the conventions of gothic fiction, the Aegolius Club, the official headquarters of the secret vampire society, is a character in itself. The interior is described as poorly-lit for human eyes, often with no more than a few candles lighting the way, with heavy drapes blocking the windows and an eerie silence that lingers in every room. Owen’s study of the genre and era (she has an M.A. in Victorian Literature) sets the tone perfectly as she guides the readers not just through the Aegolius Club, but also the darkened streets of London and the empty rooms of Aiskew Hall (James and Charlotte’s country estate).

However, as far as vampires are concerned, there’s nothing overly-inventive happening here. They mostly follow the same rules of the vampires today: no sunlight, no holy water, drinking alcohol helps to temporarily off-set the thirst for blood and they can heal themselves rather quickly. But what adds intrigue to the familiarity of the creatures is that they are not entirely aware of their limitations. Enter Augustus Mould, a character introduced as soon as the action begins. With the Club’s blessings, Mould commences experimenting on vampires, taking notes of his findings. Pages of his notebook, (with the occasional missing page or crossed out sentence) are transcribed throughout the novel, playing out during the main story line.

Appealing to fans of gothic fiction, Owen works hard to gain the trust of the reader, setting up a snug little tale of life and love in the late 1800’s, only to add the one preternatural element that befits the era perfectly; an element that delights some and disgusts others. Beyond the twist (that really isn’t much of one for us horror lovers), The Quick becomes what it was meant to be all along – a fine example of the gothic novel.