The Queen of the Tearling – Book Review 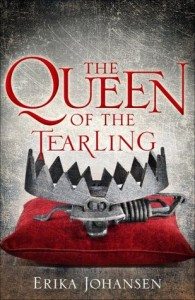 The Queen of the Tearling
Erika Johansen
Harper
2014
Reviewed by David T. Wilbanks

The debut fantasy novel by Erika Johansen is the first in a trilogy. Like the Song of Ice and Fire series by George R.R. Martin, it is light on the fantastic, concentrating mainly on the conflict between characters. The story takes place in a future that had turned medieval centuries beforehand. Nineteen year old Kelsea Raleigh Glynn, from birth trained and raised in secret to become the next queen of the Tearling, is escorted under armed guard from the only home she’s ever known–deep within a forest–and, after surviving various perils, is placed on the throne of a kingdom which has become corrupt and decadent. Now she must work against the Regent, who is her own uncle, and his assassins and political cronies in order to put things to right and thereby gain the trust of the her kingdom. All of which seems an impossible task for the young woman. Also in cahoots with the Regent, and an even greater threat, is the mysterious Red Queen of the neighboring kingdom of Mortmesne, who extorts a horrible toll from the Tearling, trading human lives against the threat of invasion by her superior forces.

There is much to recommend in this novel. The lead character is a naive yet stubborn young woman with a strong sense of values who allows little to stand in the way of her beliefs, even when she is faced with certain death. The supporting characters are well drawn and the turns in plot are interesting and satisfying enough to leave one always wondering what will happen next. This is a strong beginning to what promises to be a satisfying trilogy of intrigue and adventure.