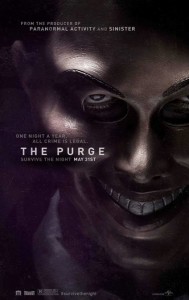 Despite a miniscule budget of only three million, The Purge received quite a lot of pre-release hype. Part of this – of course – is attributed to actor Ethan Hawke’s participation. (After the critical success of both Daybreakers and Sinister, Mr. Hawke seems to know how to pick them). Another element to the excitement is the intriguing and original premise: an amalgamation of horror and (not-too-distant) science fiction with the kind of plot that seems right at home within the pages of dystopian literature.

It’s the year 2022, and the United States of America has found a way to curtail excessive crime and overpopulation. On one night every year (over a twelve hour period) all criminal activity is sanctioned … including murder. Punishment is suspended and violence reigns supreme. This annual – and supposedly cathartic experience – has been aptly titled The Purge. Through news blips and media loops we quickly discover that despite the moral implications, The Purge is actually effective: for the remaining year misdemeanours remain almost non-existent. Apparently, the simple answer to humanity’s psychological tribulation is a united mental enema of depravity; an abandoning of all civilized behaviour in favour of our ingrained base needs and ancestral animal instincts.

If all of this sounds a tad implausible, it is. However, in this particular instance I happily suspended all disbelief for the sake of entertainment.  While it would have been interesting to look at the worldwide effect of The Purge, writer/director James Demonaco has opted instead to take a close look at the domestic component – to put under the microscope one well-to-do American family and see what mayhem eschews. The Sandin family – an envy of their entire neighbourhood – have everything they need to survive The Purge. James (Ethan Hawke) knows security intimately. After all, he sells it for a living. His wife Mary (Lena Headey – better known as Cersei from Game of Thrones), is effective at keeping both her American accent and family together. Teenage children Charlie and Zoey come with their own baggage: Charlie has major issues with The Purge, and his sister Zoey is fuming that her father won’t let her date an older boy from school. Soon night draws near and the shutters go up. When young Charlie succumbs to his warring empathy and opens up their house to a pursued homeless man, it isn’t long before all hell breaks loose from numerous fronts. The homeless victim has escaped in the house, and his masked vigilante hunters (looking for all the world like The Stranger’s home invaders on steroids) have arrived on the front doorstep demanding their god-given American right to purge. It then falls to the entire Sandin clan to make a decision: do they succumb to the invaders ultimatum – thereby becoming no better than Purge participants – or do they fight to keep their ethics alive?

Notwithstanding a director at the helm who has worked with similar themes before (Assault on Precinct 13), The Purge still suffers from various flaws. The pacing – while lent strength with a rousing ‘heartbeat’ soundtrack – never seems to attain the lofty heights we originally envisioned, and developments become stalled as the audience guesses hurdle after hurdle. Although our masked adversary is decidedly creepy at times espousing patriotic rhetoric and generally giving off an ‘American Psycho’ kind of vibe, his predictable bedlam comes far too late in the film and is ultimately ineffective.

All told, The Purge is still an above average thriller containing just enough claustrophobic moments and subtle action sequences to put it on the map. With Universal already giving the follow up a green light, one can hope that future writers take heed of the wonky philosophic undertones and give more credence to The Purge’s attractive concept.