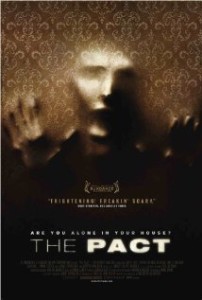 When seeking out rare gems – in this particular reviewer’s case independent horror films with a slice of sophistication – one never knows what a mixed bag they will find. With sometimes little to no information permeating the ether (and online rating systems seldom giving up their secrets), the hit or miss ratio can be much-maligned or something celebrated. In my personal opinion, a film’s overall anonymity is something to be lauded; its mere ambiguity can guarantee it a proper audience away from the rhetoric of others. The Pact (2012) is one such outing … a small sleeper of quiet horror that far exceeded any expectations I may have garnered from it.

Two sisters lie at the heart of this tale after their abusive mother has passed away. Back in her childhood home and putting final touches on the funeral, Nicole calls Annie in an attempt to have her sister present for the occasion. With memories of mistreatment still sharp, Nicole initially refuses … but makes the jaunt down anyway after Nicole seemingly vanishes from the face of the earth. Once returned, it isn’t long before Annie begins to feel the first supernatural overtones (smashed photographs and moved objects, among other things), leading her to believe Nicole’s disappearance is somehow related to the house or a presence within it. Soon after her cousin Liz succumbs to the same fate, and the audience is then treated to sublime poltergeist activity with Annie at the heart of the melee. Distraught, she flees to the local police – only to have her story rebuked. Returning to the house with a local officer and seeking revelation, Annie soon learns that her sister and cousin – although lost – could be a lot closer than anybody realizes…

Earlier I mentioned The Pact was ‘quiet’ horror – and it’s a more than adequate word to describe this film. Choosing slow moving interior shots of a suburban house, director Nicholas McCarthy gives the audience an ominous impression of the mundane by transforming simple things like a small closet space into a place of dread. The musical score is heated and tense (silent when it needs to be), but ratcheted up with rusty violins and subtle piano during moments of suspense. There are some introductions early on – an example would be a jaded cop entering the picture – where as viewers we anticipate a slide into the formulaic … but hidden around every corner is a small surprise, almost like the chapters of a novella. A tight celluloid experience notwithstanding, one cannot help but wonder how such a tale would fare within the confines of a book. For all its dark ambition, the plot structure still feels like something lifted from literature.

During the course of Annie’s sleuthing (an investigation that includes consulting a blind psychic), our young Gillian Anderson look-a-like comes to learn of a hidden room in the heart of her childhood home. It is here that the story reaches a hybrid of real world horror sparring with the supernatural in perfect duality. There is an amiable twist – one that I didn’t see coming – and a balanced quota of restrained jump moments that are effective without going overboard. With her cell phone pinpointing strange locations and photographs of dead women pointing the way, Annie soon learns of a serial killer known simply as ‘Judas’. Like the hidden room in her house, this enigmatic figure is much closer than she can possibly realize … a redemptive secret hidden in plain sight.

I know there are many out there who would construe The Pact as being somewhat unremarkable; however, with budget limitations and no major theatrical release this was never going to get the attention it deserved. With tight performances, stylish direction techniques, and imagery that is short-lived but containing unadulterated horror, The Pact will eventually go down as a small classic in the genres independent pantheon.

Note: Due to The Pact’s success, a sequel has been announced. Unfortunately the original writer and director will not be at the helm.