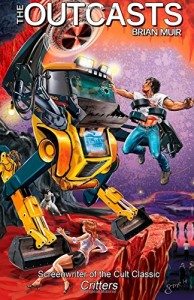 In the rural town of Konnor, Oregon, aliens have landed. The aliens are using humans to host their eggs, the vanguard of a secret invasion. The aliens have a hive mind, meaning anyone infested with the parasite can’t be trusted. The last line of defense is a band of flawed heroes. The difference here that author Muir takes the concept of the flawed hero and runs with it to extremes. His heroes have powers and abilities that are, for the most part, pretty useless: a bodybuilder with glass jaw, literally; a punk rocker with an mysterious energy supply; a man who wakes up with various body parts randomly appearing and disappearing each night; an old woman with dementia and clairvoyance, and the world’s dullest man. They must combine forces with other similarly feckless heroes to save the world without killing each other. Of course, the fact that the world scorns them ain’t exactly helping with motivation either.

Author Brian Muir may be best remembered for writing the cult sci-fi classic Critters (1986) but his film résumé includes 15 films for Full Moon, including the classic Gary Busey headliner Gingerdead Man (2005). He was also a popular mystery writer as well, with multiple appearances in Ellery Queen and Alfred Hitchcock magazines. After his premature death in 2010, his literary executor discovered a number of unpublished manuscripts as part of the estate.

The Outcasts was Muir’s earliest written novel in this treasure trove on new material. It was completed after Muir scripted Critters, but shows the same seamless transition from humor to tension. The rapid-fire jumping between characters in has a bit of 1980s throwback vibe to it, but for a 30-year old creation, it does not feel dated. Also included is a previously unpublished essay by Muir on the best screenwriting advice he ever received and a fond retrospection on the birth of Critters. This should be in the collection anyone who fondly recalls the black humor films of the 80s, as represented by Muir’s carnivorous alien hairballs.

The author’s cousin and literary executor Charles Austin Muir and Post Mortem Press should both be lauded for allowing more of the all too brief career of Brian Muir to be introduced to a new generation of fans.