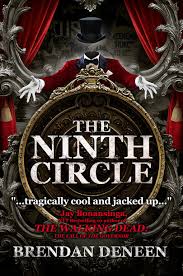 In The Ninth Circle by Brendan Deneen, 16 year old Dan feels forgotten and neglected by his family with the exception of his older brother who torments him constantly. One day he is reluctantly dragged to the circus and become entranced with its mystery. “It’s not lame. It’s awesome,” He exclaims.  He runs away to the circus and is accepted and protected by the ringmaster. Yet he finds that the circus hold torments of its own. He is considered an outsider and most of the performers are hostile to him. As the circus travels from Massachusetts to Louisiana, he discovers that each circus resident has their own torments and are living in their own version of hell. It is Dan’s unacknowledged quest to discover how and if he fits in as he negotiates this strange coming-of-age journey he finds himself in.

The Ninth Circle can be overwhelmingly depressing at times and parts are quite violent.  Yet it can also be eerily beautiful in its descriptions of the circus and its misfit crew. The author’s somewhat episodic book plays out in “Cantos” rather than chapters. As the circus travels through the nine states, Dan becomes involves with the circus people whose reactions to him range from amused affection to violent hostility. Each has a tale and each has an affliction, whether emotional or physical, that coincides with their actions of the past.

Now if this is starting to sound strangely familiar, it is probably because you have read The Inferno by Dante Alighieri. There are nine states which the circus travels through correlating to Dante’s nine circles of hell. Many of the names of the characters in Inferno show up in The Ninth Circle, such as Guido, Horace, and Beatrice. Many of the novel’s characters suffer similar fates as their Dante counterparts. For instance, in Dante’s classic, fortune tellers’ heads are reversed so they are eternally forced to walk in a way they cannot see where they are going. Deneen’s fortune teller does not experience such a physical torture but her more realistic psychological suffering has the same result. The Ninth Circle is Brendan Deneen’s imaginative retelling of The Inferno set to the big top and peppered with the suffering of the damned. Dan is the visitor both hated and envied for his freedom to leave if he chooses and for the promise that he still holds in his young life. Dan experiences this circus inferno with both horror and bewilderment as he tries to understand. At the end, we do not really know what Dan has learned for he is still a child and, just like Dante’s visitor to Hell, he yet has the wisdom and experience to fit it all together.

Clearly readers of The Ninth Circle will gleam more from the book if they are familiar with Dante’s Inferno. Yet Deneen’s version holds up well on its own and a familiarity with Dante’s classic work is not totally essential to enjoy this fantasy horror novel. The author has a good grasp of the magical realism that permeates this strange circus world. Realism and fantasy mixes well in Deneen’s hands. The book also fits solidly in a sub-genre of carnival themed horror novels that includes Katherine Dunn’s Geek Love, Ray Bradbury’s Something Wicked This Way Comes, and Will Elliott’s The Pilo Family Circus.