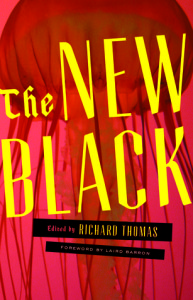 What is The New Black? It’s not only the name of the book, but also a genre in itself. New Black, or neo-noir, is ostensibly what noir literature has evolved into over many years and many stories. I say ostensibly because after Laird Barron’s foreword and Richard Thomas’ introduction, the definition, if there can be one, remains nebulous. As Barron points out, “…neo-noir simply means dark fiction, and even within that niche, there’s a hell of a lot of territory to cover.” You’ll find horror between these pages, but you’ll also find elements of many other genres, some of which may come as a surprise. Classification issues aside, The New Black is simply an extraordinary collection of fiction.

An aging boxer strives to assuage one type of pain with another in Craig Davidson’s “Rust and Bone”, a hard-hitting story of crippling guilt and atonement in the ring.

Micaela Morissette’s “The Familiars” straddles the line between magical realism and supernatural horror. An imaginary friend comes of age along with its companion, bringing to light the darkness lurking on the edges of childhood fancy.

Roy Kesey’s absurd yet emotive “Instituto” asks what perfection is, explores the possibility of attaining it at a price, and explores the relation between physical scars and the memories attached to them.

The unreliable narrator of Benjamin Percy’s “Dial Tone” struggles to make sense of his seemingly dull life, in a sort of reverse murder mystery that delves into the aimlessness and alienation of the digital age. An unorthodox haunting overshadows the proceedings.

With “It’s Against the Law to Feed the Ducks”, Paul Tremblay brings an understated take on post-apocalyptic literature. This story, viewed through the eyes of a child, is all the more emotionally potent for the illusion of normalcy the family strives to maintain.

These are by no means highlights. Richard Thomas has drawn together an astonishing array of talent, and this is the rare collection in which every story is a highlight in its own way. Its stories adeptly bridge the divide between genre and literary, becoming a hybrid that any reader of fiction will appreciate. This is a book for fans of writers as diverse as Stephen King, José Saramago, Alice Munro, Gary Braunbeck, and Flannery O’Connor. In many of the stories, characters’ internal lives are comprehensively revealed within the framework of heavily plot-driven narratives. Dark shadows loom and the occasional viscera glistens, while between the lines a far different tale unfolds.

Kafka said that “A book must be the axe for the frozen sea within us.” If that’s the case, this book is more like a bonfire that begins with a spark and ends up burning its way into all corners of our minds. Wherever your taste in fiction lies, The New Black is a stunning and essential collection.