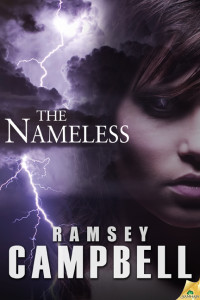 Ramsey Campbell is one of the most celebrated horror authors still writing today.  I first became aware of Campbell’s work years ago through his (continuing) contributions to Lovecraft’s Cthulhu Mythos, but he’s a prolific author of horror and dark fantasy who has penned a great deal of non-Lovecraftian fiction as well.  THE NAMELESS is one of Campbell’s earliest novels (originally published by Fontana in 1981, then reprinted in successive editions by Tor, Panther, and Warner in the mid-‘80s through the early ‘90s).  I’m happy to report that Samhain Publishing has now reprinted Campbell’s THE NAMELESS along with many of his other earlier novels.

THE NAMELESS begins simply enough: a young widow’s daughter goes missing one day and it rapidly becomes apparent that the girl has been abducted.  No ransom is ever demanded.  A day or so later, the girl’s body is found, the head obliterated by a shotgun blast.  It all seems so random, so sudden, so senseless.  Fast forward a number of years, and the mother has advanced in her career as a very successful literary agent.  Despite this tragic past, she’s now got a new career, a new home, a boyfriend, and a whole new life.  She begins to get strange phone calls and gradually picks up circumstantial clues that point to her daughter, who would now be 13, still being alive, perhaps having been kidnapped and brainwashed by a nameless cult.  Seemingly a simple premise, but this is a terrific atmospheric horror tale.

Like a lot of great horror, THE NAMELESS is a slow burn.  It begins slowly, almost mundanely, with Campbell only gradually ratcheting up the tension.  Don’t read this one expecting non-stop action, or even gore.  That’s not the kind of experience that Campbell offers.  (Because of this tendency, I’ve always thought that Campbell’s writing pace is uniquely British.)  Though I should note that there was one scene about halfway through that made me really cringe – and not much does – to the extent that I could hardly bear to finish the chapter even though I knew how pivotal it was.

In THE NAMELESS Campbell explores issues of identity and self, particularly – and this is where the horror comes in – those people and things that seek to tamper with or even annihilate an individual’s sense of self.  Here the touchstones are groups like the Manson family and other cults that reshape the personalities of their members to better fulfill the goals of the group, often to commit violence or other reprehensible acts.  These ideas of brainwashing, mind control, and perhaps even a bit of spirit possession are horrific because they infringe on the sense of self and one’s free will.  Sure, it can be terrifying to read about evil people doing terrible things.  But I think it’s even more terrifying to read about someone whose mind and body are no longer their own, when they are forced to commit acts they don’t want to.  And that’s exactly the kind of subtlety that, I think, Campbell is trying to explore here.  It’s not for every reader to be sure, but Campbell has a deft hand.

There are tantalizing hints as to the exact nature, origins, and goals of the nameless cult.  They are part of something much greater – or perhaps they only aspire to this – but I’d very much like to know more.  I’ve seen Campbell criticized for his “reticence” as a horror author, and that may be a factor here.  On the one hand, horror is often one of those genres where “less is more,” since the reader’s imagination can frequently conjure more terrifying imagery than the author’s mere words; on the other, a more visceral writing style can solidly deliver gut-punches the reader wasn’t expecting.  Having said that, I’d actually like to see Campbell return to THE NAMELESS and craft a sequel to it for us, delving more deeply into the force behind the cult.  Even after finishing the novel, I still don’t know much – or enough – about it.  What little information that is revealed is scary to be sure, but I’d like to know more.  Campbell is undoubtedly a stronger writer now than he was in the early ‘80s, and I think this would be a great opportunity for expansion.

Sure, the ending gets wrapped up a bit too quickly.  Campbell can be criticized for his tendency to be just a bit too coy.  He could have ramped up the horror factor by showing us just a bit more about the cult and its operations.  But THE NAMELESS is highly recommended nevertheless.  I think you’ll see why Campbell is such a renowned author of horror fiction after reading this reissued early novel.