The Medusa’s Gaze and Vampire’s Bite: The Science of Monsters – Book Review 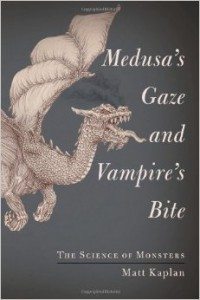 Matt Kaplan is a science journalist who basically believes all monsters exist because mankind made them. Not necessarily literally (at least in the early chapters), but most certainly in a figurative sense. Take the fabled chimera as one example. First mentioned by Homer in the Iliad, the chimera is a fire breathing lion in the front, a goat in the middle and a snake for a tail. Kaplan ponders how such a “morphological mess” could be imagined by the ancient Greeks. He eliminates any possible genetic mutations or atavisms and discusses the possible origins of the beast as a collection of mixed species fossils before settling on remains from a tar pit. The problem of there being no tar pits in Greece is resolved by noting that the Greeks had colonies on the Black Sea, which has oil reserves required for a tar pit. Conclusive? Certainly not, but a viable theory that also explains the origins of other hybrid creatures such as the pegasus or sphinx.

From giant animals through dragons to killer computers with side trips to vampires and zombies, Kaplan carefully reviews why certain monsters resonate in the collective human psyche. Kaplan’s style is easy to follow, and his insights are punctuated by footnotes of sufficient snarkiness to remind the readers that this is supposed to be fun. His science is rudimentary, and he carefully avoids getting bogged down in terminology. I am not personally thrilled to see Wade Davis’s discredited theory of tetrodotoxin poisoning appear in the text as the source of zombiism, but in all fairness, this book of possibilities, not definitive answers.

Indeed, one of Kaplan’s recurring points is that we may never know how encountering a big lion in the woods evolved into the indestructible hide of the Nemean Lion or if a premature burial gave rise to the vampire legend. It is safe to say that today’s treatments of mankind’s monsters say as much about us as the original stories tell about our ancestors.

At least their vampires didn’t sparkle