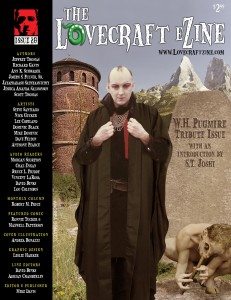 If you are a devotee of H.P. Lovecraft, you are already aware of the body of work of W.H. Pugmire, the leading Lovecraftian author writing today. And that’s not my opinion, that’s the opinion of S.T. Joshi. I just happen to agree with him wholeheartedly. To write in the style of Lovecraft is pastiche. To write in the style of Pugmire is to embrace the art of the prose poem and sing with beautiful horror of the mysteries of the universe and man’s insignificance.

The December issue of the Lovecraft eZine is a tribute to Pugmire, well deserved, and perhaps overdue. Mike Davis has gathered a veritable who’s who of contemporary mythos figures to pay homage to the lord of Sesqua Valley. It is a carefully constructed and well-balanced tribute. Although the issue is free on the website, this is one you may well want to purchase to read repeatedly, at your leisure.

The issue starts with a comic strip featuring Pugmire himself, and an essay by Robert Price on Pugmire as the embodiment of liminality. Short stories and poems follow, all inspired Pugmire’s dreamlike forest of supernatural essences hidden in the forests of the Pacific Northwest.

“A Massing of the Shades” by Richard Gavin is a cautionary tale of finding what you seek, particularly if what you seek rests in the shadow of Mount Selta.

“The Storm Horses” by Scott Thomas tells of woman who learns she is dying. She journeys to Sesqua Valley before returning to her home in Innsmouth.

“Vyvyan’s Father” by Jayaprakash Sathyamurthy tells of a young boy’s coming of age in the valley and ponders if it possible to escape your calling.

“The Winds of Sesqua Valley” by Ann K. Schwader proves once again why she is the heir apparent to Clark Ashton Smith as master of weird poetry. Sesqua Valley has never seemed to luxuriantly ominous.

“Jar of Mist” by Jeffrey Thomas is my personal favorite, a story of a father coming to terms with his daughter’s death, only to discover his daughter’s connections to Sesqua Valley.

“(he) Dreams of Lovecraftian Horror” by Joseph S. Pulver, Sr. is equal parts imagery poem and biographical sketch that tells more than it says, both about Pugmire and Pulver himself.

“The Deep Black Pit” by Jessica Amanda Salmonson is fittingly enough, a prose poem about, and dedicated to the master of the genre.