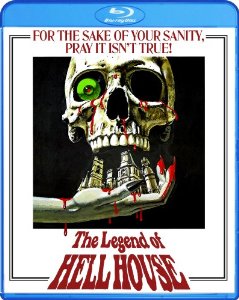 Richard Matheson’s epic haunted house novel, Hell House, is one of my all-time favorite books. This movie, made in 1973 with a screenplay by Matheson himself, captures most, but not all, of that novel’s mood and scares. As a PG-rated film, much of the wickedness and sexiness from the book has been excised, but it is still atmospheric and effective, not to mention well shot and acted. So it is one of the better haunted house stories on film, and yet it has been largely forgotten today. It usually gets left off the list when people talk about good ghost movies, and the real evidence that it’s been ignored by most: it has never been remade, nor is there any talk about remaking it now. And let me remind you, they (Hollywood) remade The House on Sorority Row and The Wicker Man, and while both of the original films are good, they’re not exactly household names. But then, maybe it’s a good thing this movie has never been remade, lest it be another The Haunting (1999). But I digress, the reason for this lament is actually some kudos for the horror lovers at Scream Factory, because who else would bring this golden oldie out on Blu-ray for the first time? Now I’ve already tipped my hand on how I think about the movie, but what’s the new Blu-ray like? Is it worth a get even if you have the old DVD? Well grab your Ouija board, but don’t open your mind up too much, and let’s spend some time inside Hellhouse.

A very practical man, who believes there are scientific reasons for all supernatural phenomena, named Dr. Barrett (played to stuffy British perfection by Clive Revill) is hired by a rich, dying man to investigate the possibility of life after death. To do this, he, his wife, and a pair of psychics are sent to “the Mt. Everest of haunted houses”, a place with a very dark history and the charming name of Hellhouse. There the quartet try to reach out to the ghosts in the house through various psychic and scientific methods, all the while the house is reaching out to them; playing with them, fooling them, and even changing them.

This is a movie where atmosphere trumps everything else. It is far more interested in mood and dread than gore and jump scares. It is very reminiscent of Robert Wise’s The Haunting from 1968, although it’s no cheap copy. It is also packed with great performances by all, with Roddy McDowall as a shell shocked psychic, the only person to have been to Hell House before and live to tell about it, as the standout. The direction by John Hough is also well done, and he shows much of the skill and style he would late use on The Watcher in the Woods and The Incubus, and thankfully none of the schlock he would dish out for Howling IV: The Original Nightmare.

Now as I said at the start of this review, Hellhouse has sadly been forgot by most, but that did not stop Scream Factory from doing a few nifty extras for this new Blu-ray release. First and foremost, this movie looks great in HD. No, that’s not a special feature, but it does deserve some credit, so here it is. As for the extras, there is an audio commentary track with actress Pamela Franklin who played the young psychic, Florence Tanner. There is also an interview/retrospective with director John Hough that runs 28 minutes. A photo gallery, theatrical trailer, and some radio spots round out the list of goodies found here.

The Legend of Hellhouse is a creepy addition to anyone’s movie library and it’s far too good to be a forgotten fright film. If you’ve already seen it, then you know that. If you haven’t, then this is a great way to watch it for the first time, looking and sounding better than ever before. This Blu-ray is highly recommended by me, get it for yourself when it comes out August 26th.